A Guide to Shakespeare's Sonnets

Part of the fun of reading a Shakespearean text is imagining the drastically different time and place in which it was composed. The historical context of the sonnets is particularly interesting because it is steeped in scandal and intrigue.

Written at the end of Queen Elizabeth I’s famous reign, Shakespeare’s Sonnets takes on many of the characteristics of the English “Golden Age” of literature. Writing, the arts, and classical learning became important in England under Elizabeth. Writers and artists began focusing on human issues and interests rather than strictly producing religious tracts. Frequent outbreaks of plague in London from 1592 through 1609 brought death to the forefront. Thus mortality, the meaning of life, and cosmic injustice became popular topics during this era.

Although it was not published until 1609, scholars speculate that Shakespeare wrote these sonnets sometime in 1592, about the time Shakespeare was writing history plays such as Henry IV Part I, Titus Andronicus, Richard III, and Edward III. We have records of the manuscript circulating among his friends and contemporary writers in 1598, and Shakespeare himself published a few of the sonnets in anthologies. However, it seems that these sonnets were never intended for mass publication as a sequence. It is unclear how the printer Thomas Thorpe got hold of the sequence, but the printer’s negative reputation suggests that he came by it through nefarious means. Thorpe has been described as “a publishing understrapper of piratical habits” who would steal manuscripts and print them without consent.

It was a time of intense political and cultural change in England, when artists such as Shakespeare drew on a large variety of influences.

Shakespeare’s sonnets draw on the Petrarchan Sonnet tradition, which became popular in England with Philip Sidney’s 1591 sonnet sequence Astrophil and Stella. Shakespeare uses the themes of this tradition—unrequited love, unattainable beauty, the speaker’s anguish—and repurposes them to tell a different story. Shakespeare’s speaker writes not to an unattainable woman but to a male youth. His anguish and desire come from his own aging body and recognition of the effects of time.

The Use of Sonnet Tropes

Shakespeare’s speaker draws on several sonnet tropes throughout the sonnet sequence. Since the sonnet was a popular genre in Elizabethan England, Shakespeare had to manipulate these tropes in order to distinguish himself from similar sequences. In this sequence, Shakespeare either challenges sonnet tropes or intensifies them. One of these tropes is the poetic blazon. In a traditional sonnet, a speaker uses the blazon, a comparison of the beloved’s body parts to natural objects, to make the love object perfect. For example, skin as white as snow, lips as red as a rose. Shakespeare’s speaker challenges the blazon when speaking about the youth by treating the youth as a whole person. He also uses the blazon to humorously demonstrate the dark lady’s unfavorable appearance rather than using it to demonstrate her perfection. (See Sonnet 130.) Traditional sonnets also focus on unrequited love for an ethereal woman, and the pain this unrequited love causes the speaker. Shakespeare’s speaker takes the trope of unrequited love and escalates it. He love a man, the ultimate unattainable object in this time period. Unlike a traditional sonnet speaker’s love, there is no chance that this beloved will ever return the speaker’s love.

Humanism was a cultural movement in Renaissance Europe that looked for wisdom in Greek and Roman thought. Humanism became a dominant educational ideology in Early Modern England. For this reason, students learned Latin and read Ovid, Virgil, and Homer. Just like many other Elizabethan dramas, poems, and pamphlets, Shakespeare’s sonnets use allusions to Greek and Roman literature and mythology for their metaphorical potency.

The Mystery of the Preface 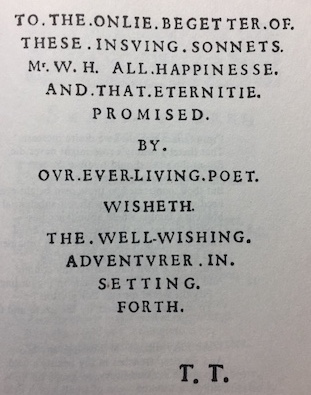 Translation: “To the only begetter of these ensuing sonnets Mr. W.H. all happiness and that eternity promised by our ever living poet wisheth the well-wishing adventurer in setting forth T.T.”

In its original printing, Shakespeare’s Sonnets came with a dedication page penned by “T.T.,” presumably the printer Thomas Thorpe (see picture of facsimile above). In it, Thorpe dedicates the sonnets to a “Mr. W.H.” on whom he wishes “all happiness and that eternity promised.” From this dedication, many have speculated that Mr. W.H. was the “youth” to whom the speaker promises eternity. However, it could also be the printer thanking whoever brought him Shakespeare’s manuscript, or a simple misprint for Shakespeare’s initials, W.S. No one has conclusively determined the person to whom these initials belong.

Another reading of this prefatory material claims that the dedication to W.H. comes from “our ever living poet,” meaning Shakespeare. Thomas Thorpe’s dedication then consists only of the second half of the lines “Wisheth the well-wishing adventurer in setting forth,” meaning good luck to the reader about to embark on reading the sequence. This interpretation suggests that Shakespeare wrote these sonnets to a specific audience and that the youth was a real person.

The two most popular theories about who the real-life Mr. W.H. was implicate two earls to whom Shakespeare explicitly dedicated other works: William Herbert, Earl of Pembroke, and Henry Wriothesley, Earl of Southampton. However, it would have been insulting to use the term “master” to refer to either of these men, so both speculations seem unlikely.

A final reading of the dedication is that Thorpe included it to create mystery around the sequence to sell books. After all, Shakespeare was completely uninvolved with the printing of these poems.

Printing was an arduous process in Early Modern England. Imagine if you had to manually carve out and place every letter, space, and period on a page when going to print your next document. That was the reality of the Early Modern printers who preserved the work of Shakespeare and his contemporaries.

In about 1440, a German man named Johannes Gutenberg invented the printing press, a machine that could reproduce multiple copies of the same page of text. Before the press, books were hand copied by monks and scribes, a process that was so expensive that only the rich could afford books. The printing press made the mass dissemination of texts possible with Gutenberg’s movable type: tiny metal blocks with letters etched into them that could be inked and stamped onto paper.

To create movable type, the printer would cut the mirror image of each letter of the alphabet into a metal block about half the size of a pencil eraser. These blocks were categorized alphabetically and set into slots on a typesetting box. Print houses would receive—or often steal—a handwritten manuscript of the play, sonnet, pamphlet, or treatise that they wanted to print. The typesetter would then recreate the writing using the movable type. It was delicate work. Typesetters deciphered the handwriting on the page, located the correct blocks of tiny type, and laid out each page so that it fit within the margins of the paper. Human errors were frequent, and limited resources led to more changes. If the typesetter ran out of one character, they would often substitute it for another. Entire words were similarly swapped, because spelling was not standardized until dictionaries became popular in the 18th and 19th centuries.

All of this means that it is impossible to know, down to the letter, what was in Shakespeare’s original manuscript. Despite inconsistencies in spelling and punctuation, scholars have agreed on a single text with a few variations. But beware of reading too much significance into each period, semicolon, or capitalization. It might just be a error made in a print shop a very long time ago.