Are you a teacher? Subscribe today to access hundreds of premium teaching resources and lesson plans! close
close
close
close
« Library « Poetry « A Little Bird I Am 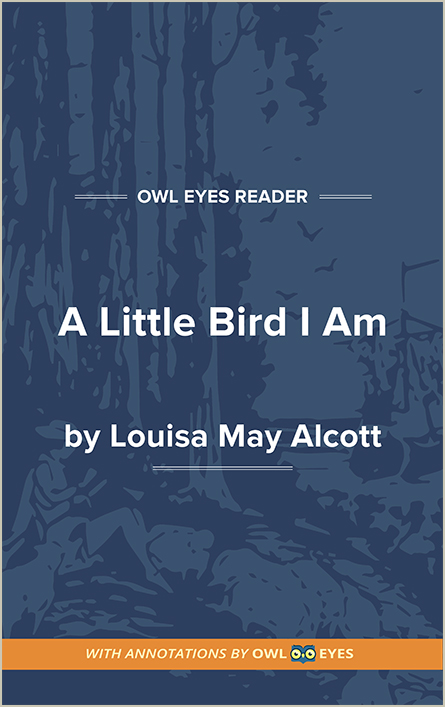 A Little Bird I Am

Alcott's short poem "A Little Bird I Am" efficiently captures the strength and originality of her writing and displays her tremendous skill as a poet and feminist. At first glance, the poem appears highly traditional, with light-hearted verse and rhymes. The poem gives voice to a speaker who identifies herself as a bird in a cage. The speaker talks about the man who trapped her and the joy she derives from singing to him. While the speaker can be read as sincerely believing that her captivity is not a form of oppression, Alcott's critical voice quickly manifests itself through a satirical edge in the lines of the poem. The speaker’s innocent compliance masks a darker truth that should breed outrage in the reader: this man has robbed the speaker of her freedom. Sarcastic undercurrents pervade the poem’s metaphors to emphasize Alcott’s claim that it is ignorant to believe that someone who has been caged can grow to love their captor. Representative of the strength and originality of Alcott's work, "A Little Bird I Am" demonstrates her sly wit and fierce condemnation of oppression; her Little Bird gives a voice to women and the disenfranchised everywhere.