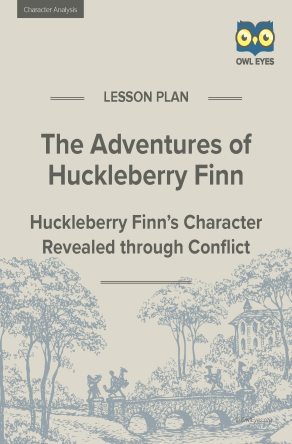 This lesson plan focuses on how Huckleberry Finn’s character is revealed through his relationship with Tom Sawyer and through the conflicts Huck experiences after he is kidnapped by his father. Students will identify Huck’s internal and external conflicts in several chapters and examine how he resolves them. They also will examine how Tom Sawyer serves as a foil for Huck’s character. By analyzing how Huck resolves the conflicts in his life and how his character differs from Tom Sawyer’s, students will be better able to describe Huck’s heroic character traits and explain how they contribute to the development of romantic themes in the novel.

Huck’s story begins in fictional St. Petersburg, the small Missouri town on the Mississippi River that is the setting in Tom Sawyer. Running away from his abusive, drunken father, Huck soon finds himself rafting down the Mississippi in the company of another runaway, a slave named Jim who has escaped captivity. Believing what he has been taught by his racist society—that God has ordained slavery as part of the natural order—Huck feels guilty for helping Jim attempt to reach freedom across the river in Illinois, but the two become faithful companions as their journey continues. Ultimately, Huck must resolve what he perceives as a moral dilemma regarding Jim’s freedom: he must decide between consigning Jim once again to the misery and degradation of slavery or rescuing him and thus damning Huck’s own soul.

While The Adventures of Huckleberry Finn has been criticized in modern times for racist elements, at the time of its publication, Huck’s believing that going to hell is preferable to leaving Jim in slavery was considered a shocking condemnation of its evils, making Twain’s novel progressive for its time. Throughout the novel, Huck’s adventures drive the plot, but it is through his character that the novel’s most profound themes are realized.

Because of Twain’s depiction of slavery in pre-Civil War Missouri, the novel should be read through a historical lens; to fully understand Huck’s character, however, the book also should be read through the lens of literary movements in American fiction. Huckleberry Finn exemplifies regionalism, or local color writing, that developed after the Civil War and served as a bridge between 19th-century romanticism and the rise of realism in 20th-century American literature. Works of local color, including Huckleberry Finn, are realistic in describing the setting, customs, and dialects of a geographical region of the country at a particular time, while also developing themes consistent with the philosophies of romanticism: idealizing nature, emphasizing personal freedom, examining the emotional life of the individual, and viewing human nature as intrinsically good, unless or until corrupted by society.

Twain’s knowledge of the Mississippi River and the small settlements along its banks, acquired from personal experience in his youth, accounts for the authenticity of local color detail in his realistic descriptions of the novel’s setting and social environment. The novel’s themes, however, evolve from romantic concepts, especially evident in the contrast between nature and society and in the development of Huck’s character. On the river, living apart from society, Huck and Jim find freedom, peace, and beauty; life on shore, however, is characterized by hypocrisy, greed, duplicity, cruelty, and violence—all traits of humanity at its worst. At the end of his journey with Jim, Huck decides to “light out for [Indian] territory ahead of the rest.” He has seen enough of “civilized” society and has no desire to be a part of it. In Huck’s intrinsic goodness remaining uncorrupted by society, he becomes Twain’s romantic hero.

As Huck pursues his adventures, eventually encountering Tom Sawyer once again, readers find the plot compelling and often humorous. In the novel’s sharp social criticism, more mature readers recognize and appreciate Twain’s consummate artistry as an American novelist exploring important themes in ways that other writers of his time were not.