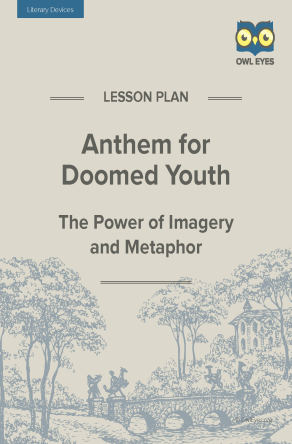 Literary Devices: The Power of Imagery and Metaphor in “Anthem for Doomed Youth”

Learning Objectives: By the end of the lesson, students will be able to

The front lines of World War I inspired some first-rate English poetry while decimating a generation of young fighting men on a scale that few anticipated.

Wilfred Owen may be the most accomplished and best known of the war’s soldier-poets. His poem “Anthem for Doomed Youth” delivers his characteristically visceral depictions of the violence endured by soldiers fighting in the trenches. It achieves its power with a series of contrasting images: chaotic battle scenes are set beside the solemn rituals of English funerary tradition, highlighting the way modern warfare stripped all dignity, comfort, and meaning from the deaths of the young soldiers. Close readings of his work reveal that underlying his war poems is a deep anger over the futility of the conflict and the emptiness of the soldiers’ sacrifices.

Owen’s depiction of warfare has little in common with the orderly scenes of glorious cavalry charges romanticized by English poets of the past. Like most young Englishmen who rushed to enlist when war broke in 1914, Owen expected a short conflict that would not only end with a decisive victory but also provide ample opportunities for noble action along the way. His hopes, and the hopes of many others, were shattered as he witnessed the bloodshed and seemingly endless stalemate ushered in by military innovations such as machine guns, nerve gas, and barbed wire. Sadly, Owen’s death on the battlefield in November of 1918, just a week before the end of the war, meant he did not live to see most of his poems published. His poetic output was not lost or forgotten, though, thanks to his friend and literary mentor, Siegfried Sassoon, who survived the war and guided his deceased friend’s poems though publication.

Identifying and Analyzing Examples of Imagery