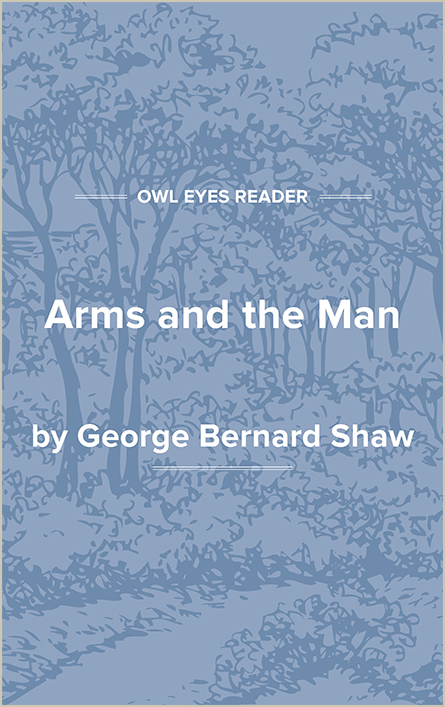 George Bernard Shaw was born in Dublin, Ireland, on July 26, 1856, the son of English Protestants. He left school at the age of fourteen and worked for five years in a land agent’s office. At the age of twenty, Shaw left Ireland for London. Two years earlier, Shaw’s mother had moved to London together with his two sisters, leaving her alcoholic husband and following her voice teacher. Her instructor arranged for the young Shaw to write several articles on music for a satirical weekly review, The Hornet. Shaw remained without any fulfilling employment or literary success during his first decade in London. After initially working as a clerk, he soon turned to literature, writing several novels between 1886 and 1905. None of these was successful. Most notable among them are Cashel Byron’s Profession (1886) and Love Among the Artists (1900).

During this time societies for philosophical discussion were flourishing in London. Shaw joined the humanist and progressive Zetetical Society and the Dialectical Society, as well as literary societies. In order to overcome his shyness, he forced himself to speak at every meeting. After attending a lecture by the American Henry George in 1882 and, in 1884, reading Karl Marx’s Das Kapital (1867, 1885, 1894; first translated as Capital: A Critique of Political Economy, 1886, 1907, 1909), Shaw turned to socialism, which was to remain a strong presence in his plays. For the next twelve years he spoke as a socialist propagator once or twice a week all over London. This experience taught Shaw to present his arguments in dialectic dramatic form and to enliven them with his humor.

Socialist politics dominated Shaw’s career as a local government councillor in St. Pancras in North London from 1897 to 1903. Shaw’s politics also led him to become one of the founders of the Fabian Society, for which he edited Fabian Essays in Socialism (1889) and wrote many well-known socialist tracts. The Fabian Society did not have a proletarian element but was a group of middle-class intellectuals who shared Marx’s criticism of middle-class institutions. Its members believed in the gradual promotion of socialism rather than revolution. Shaw was never a conventional socialist: His political views were influenced by his admiration of vitality and power as well as by his belief in an active and individually willed kind of evolution, urged on by what he called the Life Force.

From 1886 to 1889, Shaw wrote unsigned art criticism for the World. He then worked until 1890 as music critic for the newly founded Star newspaper before becoming the World’s music critic. Shaw admired Wolfgang Amadeus Mozart and Richard Wagner and introduced new standards for judging performers and composers, often mocking conventional taste and fashionable preferences. From 1895 to 1898, he wrote drama criticism for the Saturday Review. His reviews were deliberately provocative and challenged contemporary English ideas about plays and acting. During this period he also wrote The Quintessence of Ibsenism (1891) and The Perfect Wagnerite: A Commentary on “The Ring of the Niblungs” (1898), tributes to artist-philosophers whom he admired. In 1898 Shaw married the wealthy Charlotte Payne-Townshend and subsequently devoted himself almost exclusively to writing plays.

His music and drama criticism, as well as his socialist politics, were to shape his career as a playwright. Shaw used conventional dramatic structure and even conventional themes for highly unconventional purposes. From the beginning, Shaw hoped to shock his audiences into taking a new look at their society and its moral problems. His first play, Widowers’ Houses (wr. 1885-1892, pr. 1892, pb. 1893), was begun in 1885 with his friend and fellow socialist William Archer. Shaw finished the play independently in 1892. Widowers’ Houses deals with slumlords, revealing through techniques of inversion and reversal the social and economic conditions responsible for the problem. Shaw’s next play, Mrs....