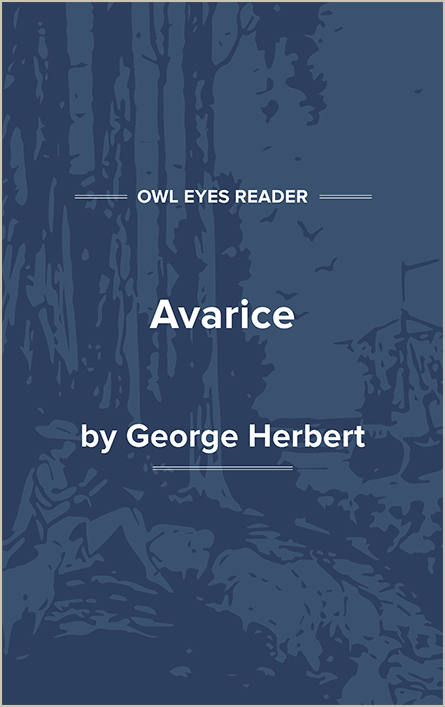 The fifth son of an aristocratic family, the poet George Herbert received his early education from his mother, whom he characterizes in his Parentalia, the only volume published in his lifetime. Between the ages of twelve and seventeen he studied at Westminster School. Winner of a scholarship to Trinity College, Cambridge, he received his bachelor’s degree in 1613 and stayed on as minor fellow and later as major fellow until he received his master’s degree in 1616. While at Cambridge he distinguished himself as a Latin and Greek scholar and wrote Latin verses for publication. When he was twenty-three he became prelector in rhetoric, and in 1619 he became public orator. He distinguished himself in the service of James I and received many royal favors for his diligence. The death of the king and the reversal of policies set Herbert on the road that was to immortalize him—that of clergyman and Christian poet. On being ordained deacon in 1626, he resigned his post as orator of Cambridge and became prebendary of Layton Ecclesia.

In 1629 he married Jane Danvers, who was, according to Izaak Walton, Herbert’s first biographer, a most pious and pleasant person. In 1630 King Charles I presented him with a clerical post at Bemerton, near Salisbury. There Herbert not only rebuilt the church and parsonage but also became an admired preacher. Walton called him “holy Herbert.” During this time, he apparently wrote the “sacred poems” that depict his own spiritual struggles and relationship with God. In its intensity and complexity his poetry is similar to that of John Donne, with whom Herbert is often compared. Three years after assuming the Bemerton living, Herbert died of consumption. He was buried under the altar of Bemerton Church on March 3, 1633. The poems contained in The Temple were collected and published in the same year by his friend Nicholas Ferrar.