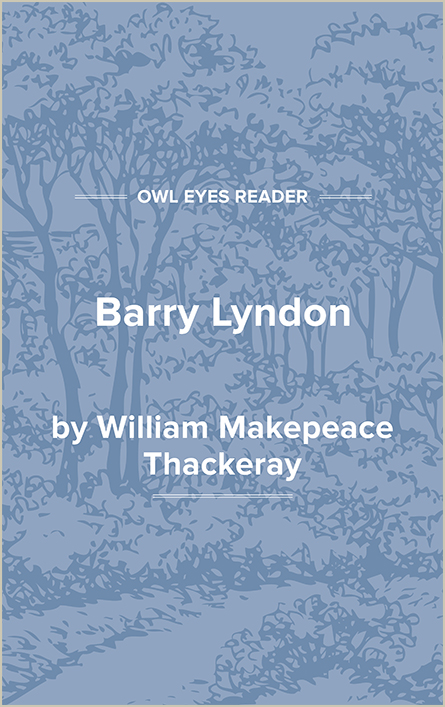 William Makepeace Thackeray was born on July 18, 1811, in Calcutta, India. His father, Richmond Thackeray, pursued a family career in the East India Company; his mother, Anne Becher, traced her ancestry back to a sixteenth century sheriff of London. The senior William Makepeace Thackeray and John Harman Becher had extensive interests in India. After his father’s death in 1815, Thackeray’s mother married Major Henry Carmichael-Smith, a former suitor. As was the custom, Thackeray was sent to England at the age of five for reasons of health and education. His unhappy, early experiences at the Arthurs’ school and at Chiswick were later rendered in “Dr. Birch and his Young Friends” (1849).

At Cambridge, as a member of a privileged class, Thackeray was trained in the standards and preconceptions that he later pilloried in The Snobs of England, by One of Themselves (1846-1847; later published as The Book of Snobs, 1848, 1852) and many other works. He was left with a distaste for bullying and with a distrust of his own intellectual abilities. After two years at Cambridge, Thackeray abandoned the pursuit of academic honors. Although he believed that his education had, on the whole, served him ill, it nevertheless had given him a background in history and culture, a double appreciation that is well evidenced in Henry Esmond; it also convinced him of his social status, although his expensive aristocratic habits were to prove difficult to control.

The gentle satire evident in Vanity Fair’s Pumpernickel chapters reflect Thackeray’s happy six-month tour of Germany before he undertook to study law in London. While the discipline soon proved not to his taste, his life as a gentleman of fashion (a life that included large gambling debts) was congenial, at least until the collapse of many of the Indian commercial houses reversed his inheritance prospects. Almost relieved to be forced to make his own way, Thackeray decided to develop his talent for drawing, making friends with Daniel Maclise and being tutored by George Cruikshank. While in Paris studying art, he met and married Isabella Shawe, the daughter of a colonel in the Indian army. He endeavored to support his family through journalistic activities, even offering to illustrate Charles Dickens’s Pickwick Papers (1836-1837, serial; 1837, book). His friendship with Daniel Maginn made his “Yellowplush Papers” welcome in the columns of Fraser’s Magazine, whose readers were regaled with the malapropisms of a rascally footman. In addition, he wrote for The Times of London and for a number of obscure journals. His first long attempt at fiction was Catherine, a parody of the Newgate Novel; in quick succession he produced A Shabby Genteel Story, and Other Tales (1852) and The Paris Sketch Book.

In 1840, Thackeray was visited by domestic calamity; upon the birth of their third daughter, his wife, Isabella, went insane and required institutionalization. The child-rearing was assumed by Thackeray’s parents, leaving him to recoup his writing career, initially with The History of Samuel Titmarsh and the Great Hoggarty Diamond and soon with contributions to Punch and the Morning Chronicle. During these middle years, Thackeray solaced himself for the want of domestic connections with a series of friendships with old Cambridge acquaintances such as Alfred, Lord Tennyson and W. H. Brookfield, as well as with journalistic brethren such as Francis Sylvester Mahoney (the “Father Prout” of Fraser’s Magazine fame) and with Dickens himself, whom Thackeray could, however, never accept as a “gentleman.” His travel literature was published at this time.

Thackeray’s connection with Punch, begun in 1842, was an important one. From contributing fillers, he went on to write a number of series; moreover, Thackeray’s rivalry with the other principal writer, Douglass Jerrold, was to affect the course of Punch ’s publishing history, turning the tide from radicalism and democracy to a Whiggish conservatism of which...