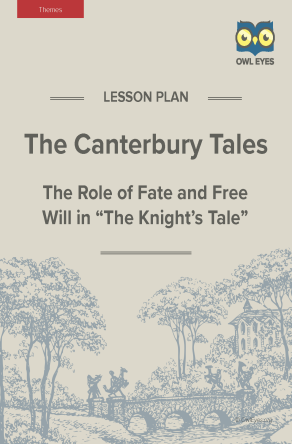 This lesson plan focuses on the theme of fate vs. free will in “The Knight’s Tale.” Students will closely examine the different conversations between the main characters and their respective gods—Venus, Mars, and Diana—to evaluate how the text explores the tension between fate and free will. Students will discuss their observations in order to interpret the role and function of this theme within the story. Upon completing this lesson plan, students will be better able to identify and critically analyze thematic elements within the text to justify their own interpretations of themes in “The Knight’s Tale.”

As one of the foundational texts in the English canon, Chaucer’s The Canterbury Tales is an estates satire, a literary genre from the Middle Ages that presents and critiques the social structure of medieval England. English society in the Middle Ages consisted of three estates: the Church, the Nobility, and the Peasantry.

In The Canterbury Tales, representatives of each of the three estates are among the religious pilgrims making their way to the shrine of Thomas Becket at Canterbury Cathedral. In describing the pilgrims and indirectly contrasting them with one another, Chaucer holds some up to ridicule while extolling the virtues of others. Their characters are also developed through the tales they choose to tell on the way to Canterbury.

Among the pilgrims, none is more revered than the Knight, a member of the nobility who is, in fact, noble in every way. Distinguished, wise, courageous, humble, and faithful, he is “a true, a perfect gentle knight,” one who has “followed chivalry” since the first day he “began to ride abroad.” Chivalry as defined in Chaucer’s description of the Knight is fealty to “truth, honor, generousness and courtesy.” It is fitting then, and consistent with the Knight’s character, that he tells a tale of classic, chivalric romance.

In “The Knight’s Tale,” two knights desire a chaste woman and must fight each other to win her hand in marriage. The story is set in historical Greece under the rule of Theseus and Hippolyta. While imprisoned in Theseus’s court, Arcita and Palamon fall in love with Hippolyta’s sister Emily. The two knights fight over fair Emily until both gain freedom by twists of fate. Though Arcita and Palamon are set free, they return to Theseus’s kingdom to pursue their love. When they are caught, they make the chivalrous decision to fight each other to the death for the maid’s hand, and each of them seeks help from one of the gods in order to secure the destiny he desires.

The Greek gods and fate play a significant role in determining the outcome of this story. However, Arcita and Palamon also appear to exercise free will in shaping their futures. In one scene in particular, the characters go to the temples of different gods and pray for their individual desires. Through each character’s interaction with the gods, Chaucer explores the concept of free will in a world ruled by ancient fate and medieval fortune.

Use specific examples from the text in order to answer the following questions. For example, do not simply state what the tone of the appeal is; state the specific words or metaphors that make you believe that this is the tone. You can paraphrase, write down line numbers, or pull out specific words/metaphors; do not copy full lines or sections of the text into this worksheet.

Why does your character appeal to this god? What does this tell us about the character’s desires (or vision for the future)?

Does the character explicitly or implicitly address fortune in the appeal to the god? What does this appeal say about the character’s relationship to the idea of fate or fortune?

Does the character explicitly or implicitly address fortune in reacting to the god’s response? What does this reaction say about the character’s relationship to the idea of fate or fortune?