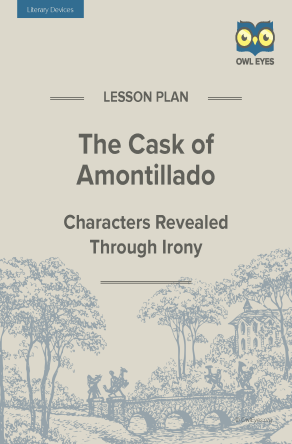 A classic tale of deception and revenge, “The Cask of Amontillado” concerns a diabolical murder in the catacombs beneath an Italian palazzo. With the dramatic first sentence, readers enter the disturbed mind of Montresor, the main character who narrates the story. In recounting the events, Montresor reveals the depth of his depravity in avenging a personal insult. The object of Montresor’s intense hatred and obsession with revenge is Fortunato, a wealthy wine merchant whose transgressions against Montresor are never specifically identified. Fortunato’s arrogance and foolish nature make it possible for Montresor to succeed in carrying out a carefully crafted scheme—to murder Fortunato by burying him alive in the catacombs.

As Montresor relates how he planned and executed his revenge, his descriptions and interpretations of what occurred are infused with irony, the predominant literary technique employed by Poe in the narrative. Dramatic irony is created as readers are drawn into Montresor’s mind to view events from his perspective as well as their own. Also evident in the story are situational and verbal irony. Through the irony that permeates “The Cask of Amontillado,” the characters of Montresor and Fortunato are revealed indirectly and the horror of Montresor’s revenge is intensified. Poe’s use of irony also underscores the mood of the story in its examination of human nature and the darkness to be found in the human psyche.

Worksheet Excerpt: What Is Revealed About Montresor and Fortunato?