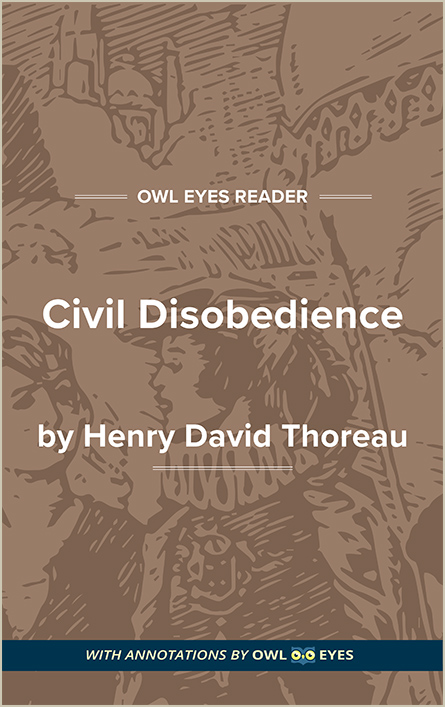 "“Render therefore to Caesar that which is Caesar's, and to God those things which are God's,”..."  See in text (Civil Disobedience)

Further building on the allusion to Matthew 22:19 above, Thoreau continues his argument about money and authority in this reference to the biblical book of Matthew 22:21. Here, he repeats Jesus’s words with a slightly different emphasis: people should pay money to the government only if they benefit from and agree with the government’s policies.

"“Show me the tribute-money,”..."  See in text (Civil Disobedience)

This is a reference to the biblical book of Matthew 22:19, in which Jesus says, “Show me the tax-money.” The words here may differ, but the meaning remains the same. Money carries an image of the authority of the state, but this is different from a moral authority.

"Some are petitioning the State to dissolve the Union..."  See in text (Civil Disobedience)

Thoreau is making a reference to slavery and the threats of the southern states to secede. Since “Civil Disobedience” was published in 1849, this is a clear indication that slavery had remained a contentious issue since the country was founded, eventually leading to the American Civil War (1861–1865). However, Thoreau is not making an argument for or against slavery in this passage; rather, he is building a case for people to not pay taxes to the treasury as a form of protest.