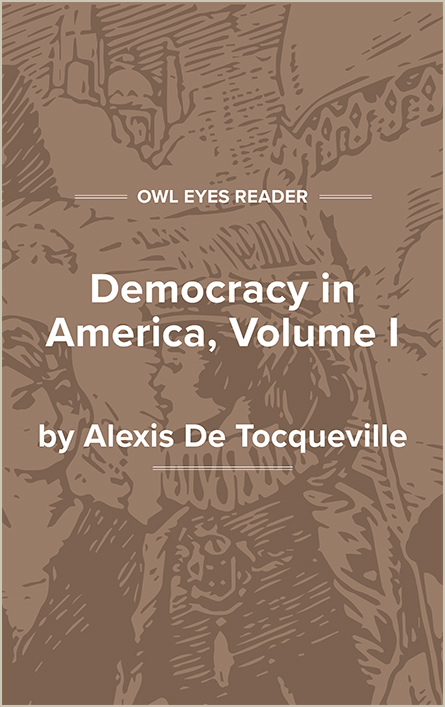 Alexis de Tocqueville (tawk-veel) was born in Paris in 1805. As a child he displayed great powers of intelligence, and he was fortunate enough to be allowed to develop them through study and travel. His journey to the United States resulted in his first book, a study of the penal system of both the Old and New Worlds. This book, which appeared in 1832, was based on a long and hard exploration of a year’s duration, during which he familiarized himself with the nature of American culture. Another book, one which was to make him famous, was also a consequence of this journey. Democracy in America immediately raised Tocqueville to the status of a great European author.

Democracy in America was the answer of an empiricist to political theories derived largely from speculation. It was based on close study of institutions rather than on a theory of human nature, and it covered in great detail the economics, legal structure, and social structure of the United States. It covered, too, the dangers of democracy: the probability of increased centralization of power, the encroachment of oligarchy on popular rights. In the years after the publication of this great work Tocqueville took an active part in government and became a fascinated observer of the violent political changes of the 1830’s and 1840’s. During this period of his life, Tocqueville was building a factual and philosophical foundation for his last historical masterpiece.

The preoccupation of Tocqueville during these years was decidedly not with ideas or theories but with what he called the realities of authority, morality, and religion. He was opposed to revolutionary activities that would, in the name of reform, destroy these positive values. His fear was of too much freedom, of the destruction of the European community by private interests. He wrote of the dangers from two directions: from a plutocracy that would become more and more selfish, considering the working classes as of no more value than the machines they operated, and from the despotism of the working classes themselves.

In his books, letters, and personal life he consistently stated that institutions that worked badly were preferable to those that did not work at all. He foretold the new despotism of the twentieth century, and he characterized it as the product of a time that had abandoned its past. The ties of caste, class, corporation, and family were essential to his view of orderly government, and he discerned that these ties were rapidly becoming weaker even in his own lifetime. What would replace them was private interest, whether of the mob, the middle classes, or a ruling clique. The one way to stop this danger, he believed, was through freedom. Political freedom, he stated in his last work, was the one agent that could unite the varying interests of the modern state.

After the revolution of 1848 in France, Tocqueville was elected to the new legislature. In 1851 this position led to a brief imprisonment for opposing the coup d’etat of Louis Napoleon. In 1854, Tocqueville traveled to Germany to study the origins of feudalism. This study was part of his research into the background of the French Revolution that began in 1789. The result of this research was The Old Régime and the Revolution. Tocqueville’s thesis, never before articulated, was that the revolution was accomplished in the minds of men long before the events of 1789.

Bathed in the laurels of this masterpiece, Tocqueville visited England for the last time in 1857. Back in Paris the following spring, while working on a second volume on the French Revolution, this one on the actual events, he suddenly became very ill. His health failed to improve, and he and his wife moved to the warmer climate of Cannes, where he died on April 16, 1859. The second volume on the French Revolution was left to posterity only in the form of notes, which were later organized by the editors of his complete works.