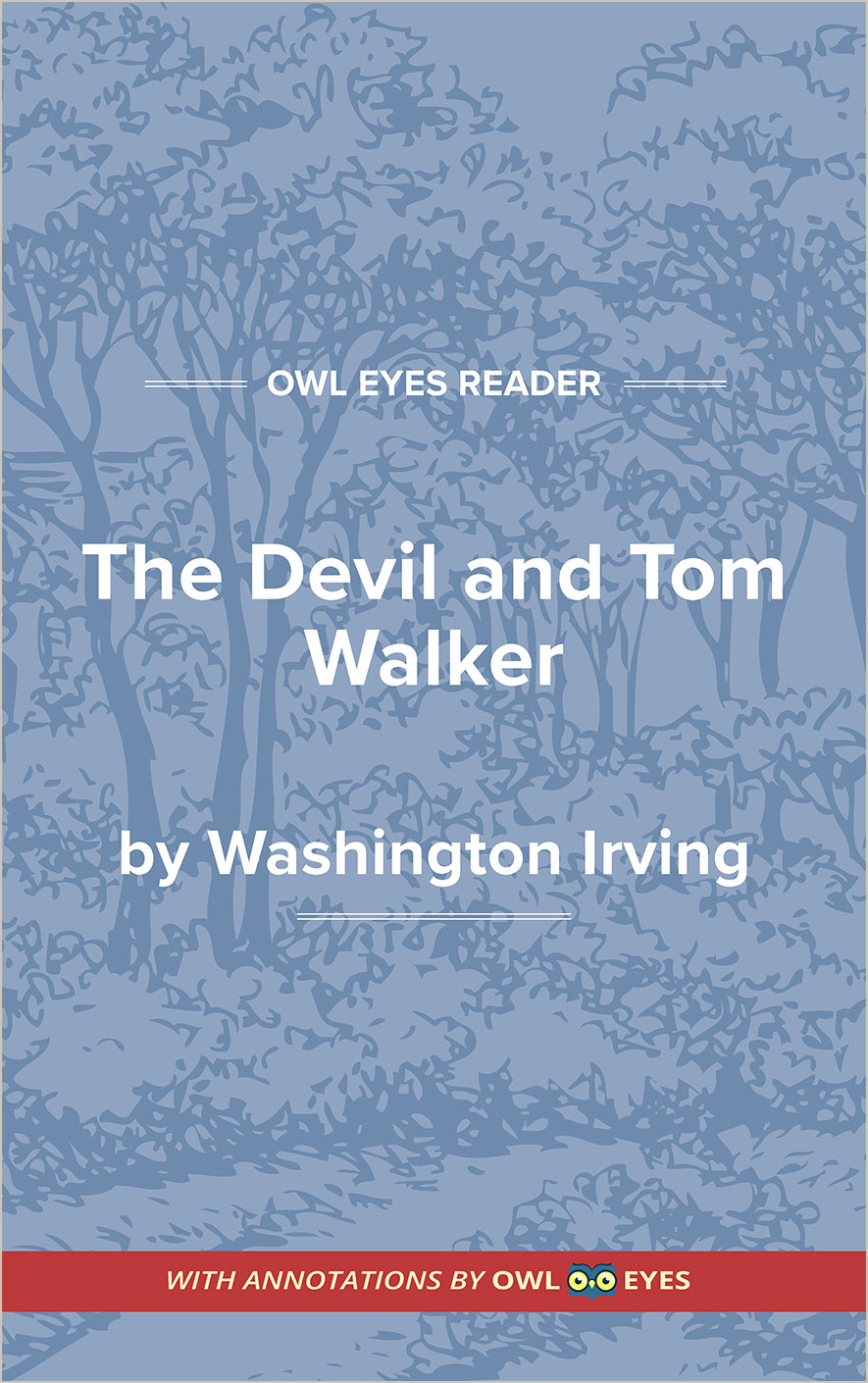 Themes in The Devil and Tom Walker

Moral Allegory: A moral allegory conveys a moral message through symbolic figures, imagery, and plots that give moral retribution to immoral characters. “The Devil and Tom Walker” contains a moral allegory that offers a warning against greed and the pursuit of earthly gain. In this story, sinful behavior is met with punishment, and the devil controls the souls of those driven by wealth.

Moral Corruption: Tom Walker and his wife embody moral corruption, greed, and hypocritical religion. They are both willing to sacrifice the other for material gain. Tom manipulates his friendships with others to take advantage of them in his business, and he uses false religion to appear like an upstanding citizen. Tom and his wife both suffer retribution at the hands of the devil, emphasizing the story’s theme that moral corruption ends in punishment and damnation.

Social Commentary: Irving’s tale makes strong social commentary against the slave trade and religious persecution. Even Tom, a character driven by greed and self interest, will not engage in the slave trade. This is a strong condemnation of the institution of slavery. Religious persecution of Anabaptists and Quakers is shown as pleasing to the devil, suggesting that squabbles among sects of Christianity serve the devil, not the community.

Themes Examples in The Devil and Tom Walker:

"Let all gripping money-brokers lay this story to heart...."  See in text (Text of the Story)

Irving wrote this story in the style of a folktale, and these types of stories are usually allegories that symbolize larger conditions of human nature. Tom's pact with the devil, his sinful actions, and his religious hypocrisy, all reveal how Irving believes such behavior will be punished, and he has his narrator end the tale with an appropriate warning.

"into the black hemlock swamp toward the old Indian fort..."  See in text (Text of the Story)

The old Indian fort is not only where Tom first made a deal with the devil but is also the gateway to hell. Irving is likely suggesting that sinful behavior always comes full circle and ends in punishment.

"his big Bible on the desk buried under the mortgage he was about to foreclose..."  See in text (Text of the Story)

Simply having the Bible around the house doesn't help hypocrites like Tom when the devil comes knocking at his door. Irving captures this idea perfectly by having the Bible buried under the land jobber's mortgage that Tom is about to foreclose, revealing Tom's real priorities.

"for whom he had professed the greatest friendship..."  See in text (Text of the Story)

One of the reasons Tom has been so effective at driving people into inescapable debt is that he pretends to be their friends and have their best interests at heart. While the land jobber and others are not entirely blameless in their attempts to get rich quickly, Tom has actively manipulated his relationships with others to maximize his profits.

"everyone driven to raise money by desperate means..."  See in text (Text of the Story)

Irving shows that Tom and his wife are not the only people in the area who are greedy. In fact, it seems that many in New England are looking for ways to get rich quick regardless of the moral cost. The resulting economic depression makes people more desperate for money, which works in Tom's favor. He's able to lend money at even more exorbitant rates because people are willing to deal with him even on bad terms.

"but the devil himself could not tempt him to turn slave-trader...."  See in text (Text of the Story)

Even though Tom appears to not have any moral qualms about dealing with the devil out of greed, he refuses to engage in the slave trade. This suggests just how morally outrageous and awful such a profession is, and it is one of the story's most obvious moral accusations. Interestingly, Tom's refusal here is also his only act of grace in the tale.

"The most current and probable story..."  See in text (Text of the Story)

The narrator offers several different versions of what possibly happened to Tom's wife. A couple of these have no moral lesson associated with them, but notice how the one he chooses has the most prominent moralistic message of all: the punishment for greed and dealing with the devil is damnation. This is an example of how the narrator is using the storytelling medium to relay messages about moral lessons to the readers.

"she urged her husband to comply..."  See in text (Text of the Story)

Tom's wife is perfectly content to allow her husband to sacrifice himself for the sake of financial gain, and she pressures him to do it. This willingness to let her husband damn himself represents a complete lack of concern for morals or spiritual well-being and reinforces the dangers of greed and moral corruption.

"What these conditions were may be easily surmised..."  See in text (Text of the Story)

Readers familiar with a Faustian bargain and/or church doctrine understand that the only possession that the devil typically wants to barter for are human souls. It's possible that the narrator doesn't say this explicitly because the very thought of someone being so greedy that he'd sell his soul for treasure or material gain is too horrific.

"I amuse myself by presiding at the persecutions..."  See in text (Text of the Story)

Since the Quakers and Anabaptists are particularly strict sects of Christianity, the devil would find it amusing to see these groups persecuted by other Christians because they would be some of the least likely to commit sinful offenses. The devil's pleasure at this persecution emphasizes how hypocritical the actions of Christians against one another are, because they only serve the devil's evil will rather than the good of the community.

The idea behind this statement (and, perhaps, the story itself) is that ownership is an illusion. Only the devil truly possesses these things in the physical world, and he uses them to tempt humans to eternal damnation, like he's done with Peabody and Crowninshield. The devil's swamp shows the moral corruption of society's leaders and foreshadows their damnation. The fact that many of the names on the trees are powerful figures reinforces the notion that power and wealth invariably leads to moral corruption.

"Deacon Peabody be damned..."  See in text (Text of the Story)

While Deacon Peabody may own the physical swamp, it's clear that the devil has spiritual ownership of the accursed grounds. The devil reveals that Deacon Peabody actually belongs to the devil because of how he hypocritically scrutinizes his neighbors’ sins and doesn't look after his own. The tree with Peabody's name on it demonstrates how on the outside the man might appear successful while on the inside he is rotten and corrupt.

"place in this last foothold of the Indian warriors...."  See in text (Text of the Story)

War is a very violent expression of human greed because it is often committed for the desire of another's material possessions. The presence of the fort attests to how war (and therefore greed) ultimately results in nothing but ruin and loss.

"he always does with buried treasure, particularly when it has been ill-gotten...."  See in text (Text of the Story)

Irving presents one of his themes with the devil's presence at the burying of Kidd's treasure: greed and the moral harm it causes. By saying that the devil is always guarding money, particularly stolen money, Irving uses the devil to show how temptation and greed ruin the lives of those who seek wealth above all else.

"The good people of Boston shook their heads and shrugged their shoulders..."  See in text (Text of the Story)

Even though Tom was carried off by the devil in a spectacular way, the Bostonians don't seem to react very strongly to this event. Irving is likely suggesting, through a bit of dark humor and satire, that even in this town of Puritan Christians, dealing with the devil is not altogether an uncommon occurrence and there are many sinful and hypocritical people in this society.

The fact that Tom's shrewish wife was so vicious with the devil, and the fact that Tom somewhat pities "Old Scratch," shows how Irving not only uses the story to provide moral instruction, but he also believes that by adding humor, literature can be morally instructive and entertaining at the same time.

"and every portable article of value...."  See in text (Text of the Story)

The devil has Tom’s wife sacrifice the things that are of the highest value to her: the household’s silver and other valuable items. In another darkly humorous example of greed corrupting one's morals, Tom cares not for his wife's well-being and misses the silver far more than his wife.

"Absalom Crowninshield, the rich buccaneer...."  See in text (Text of the Story)

Ironically, these people in this story that get the devil's mark are not outcasts but leaders of society, which suggests how spiritually corrupt society is. The actually sinful Absalom Crowninshield was praised as a pious man at the time of his death despite his vulgar displays of the wealth that he acquired through disreputable means.

"that the savages held incantations here and made sacrifices..."  See in text (Text of the Story)

The idea that the American Indians worship the devil conforms to the racist perception of Native Americans when the story was written. However, it is worth noting that the story depicts European Americans as devil worshippers because they act on their greed and corrupt themselves. From this perspective, it's clear that the colonists are no more moral than the Native Americans; they are simply better about lying to themselves about their own immorality.

"there was a great amount of treasure..."  See in text (Text of the Story)

The description of the inlet and swamp as well as the inclusion of the devil introduce the story's themes of moral corruption and greed while simultaneously helping establish a dark and mysterious tone for the story. The swamp is dark and dangerous, but it also has a seductive allure with the promise of wealth and hidden treasure.

"Like most short-cuts, it was an ill-chosen route..."  See in text (Text of the Story)

Irving has Tom Walker take a shortcut to comment on cheating or seeking the quickest way to wealth—providing another example of how Tom is so greedy that he cuts corners for his own gain when others wouldn't. The shortcut in the swamp symbolizes these shortcuts people try to use to get ahead in the world. However, such paths often contain risks and complications, in this case not only economic ones, but perhaps ones that lead to eternal damnation.