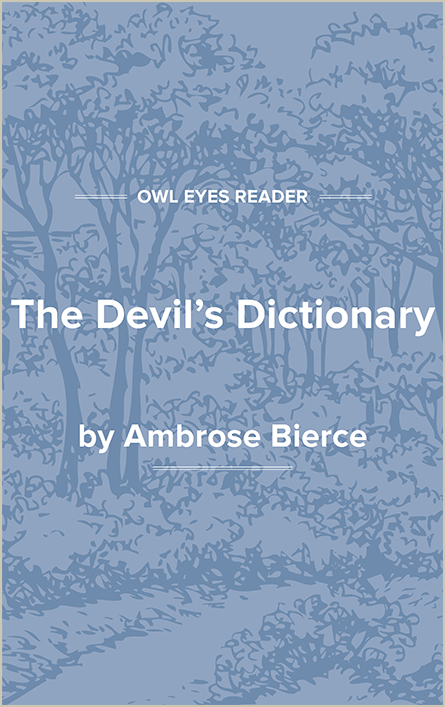 Ambrose Bierce was born in Horse Cave Creek, in Meigs County, Ohio, on June 24, 1842, to Laura and Marcus Aurelius Bierce. When Bierce was four years old, the family moved to northern Indiana, and it was there that the writer grew up. He inherited an interest in books from his father and was instructed in religion by his mother.

A career in journalism and an involvement and interest in things military began early for Bierce. He left home at fifteen and worked as a printer’s devil for two years for a local newspaper. At seventeen he entered the Kentucky Military Institute. Shortly after he left the institute, the Civil War broke out, and Bierce was one of the first to enlist in the Ninth Regiment of the Indiana Volunteers, which he served, off and on, for three years. During his service he received numerous citations for bravery, was wounded in the head, and rose to the rank of first lieutenant.

After being discharged, Bierce tracked down confiscated Confederate cotton for the federal government and then accompanied his former commander, General W. B. Hazen, a hot-headed leader whom he admired, on a mapping expedition to the West. It was on this trip that Bierce settled in San Francisco, where he was able to begin his writing career in earnest. In 1868 he took a job with a newspaper called the News-Letter, for which he wrote a column titled “Town Crier.” In it, he employed satire and wit to expose and attack both public figures and institutions he deemed guilty of hypocrisy. The column was a rousing local success.

Bierce married Molly Day in 1871, and a honeymoon trip to Europe (courtesy of Molly’s father) took the writer to London, where he went to work for Tom Hood’s Fun and for Figaro, writing under the pen name Dod Grile. He also published three collections of columns, sketches, and fiction under this name while in London: The Fiend’s Delight (1873), Nuggets and Dust Panned out in California (1873), and Cobwebs from an Empty Skull (1874). The cynicism displayed in the pieces that make up these books and the articles he wrote for the London papers earned the writer the nickname “Bitter Bierce.”

Bierce returned reluctantly to San Francisco in 1877 and wrote for and edited various newspapers during the following nine years, all the while producing articles that enhanced his reputation as a witty, even cruel social satirist. During this period he became the mentor of several aspiring writers and put together a collection of pessimistic and satirical definitions which he titled “The Devil’s Dictionary.” In 1886, he went to work for the San Francisco Examiner. His marriage dissolved in 1888.

The high point of Bierce’s career in terms of his fiction writing came in 1891 with the publication of Tales of Soldiers and Civilians (subsequently altered and published under the title In the Midst of Life in 1898). It is the bizarre, even supernatural, violent, and cruelly ironic stories of this...