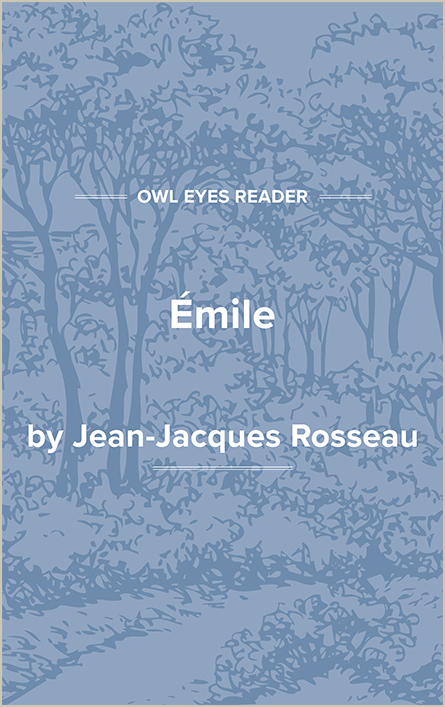 Jean-Jacques Rousseau’s treatise on education—a novel in name only—is addressed to mothers in the hope that, as a result of learning Rousseau’s ideas on education, they will permit their children to develop naturally without letting them be crushed by social conditions. Children cannot be left to themselves from birth, because the world as it is would turn them into beasts. The problem is to educate a child in the midst of society in such a manner that society does not spoil her or him.

In Émile, Rousseau argues that education comes from nature, from other people, and from things. The education from other people and from things must be controlled, so that habits conformable to nature will develop. Children have natural tendencies that should be encouraged, for nature intends children to be adults; the aim of education, according to Rousseau, is to make a child an adult. However, by swaddling children, by turning them over to wet nurses, and by punishing them for not doing what is said to be their duty, parents turn children from natural ways of acting and spoil them for life.

Rousseau insists that the proper way to bring up a child is to begin by having the mother nurse the child and the father train the child. If substitutes must be found, however, a wet nurse of good disposition who was lately a mother should be selected, and a young tutor should be chosen, preferably one with the qualities of Rousseau.

In order to explain his theory of education, Rousseau refers to an imaginary pupil, Émile. The child should come from France, since inhabitants of temperate zones are more adaptable and more intelligent than those from other climates. The child should be from a wealthy family, since the poor are educated by life itself, and should be an orphan in order to allow Rousseau free range as tutor. Finally, the child should be healthy in body and mind.

Rousseau recommends a predominantly vegetable diet, particularly for the nurse, since the milk will be better if meat is not eaten. The tutor should see to it that the child is taken out to breathe the fresh air of the country, and, if possible, the family should live in the country: “Men are devoured by our towns.”

The child should become accustomed to frequent baths but should not be softened by warm water or by other pampering that destroys natural vigor. The child should also not be allowed to fall into habits other than that of having no habits. Regular mealtimes and bedtimes should not be imposed, and, as far as possible, the child should be free to act as he or she chooses. Injuries or illness may result, but it is better for a child to learn how to live naturally than to become a weak and artificial adult.

“The natural man is interested in all new things,” wrote Rousseau, and he urged that the child be introduced to new things in such a way that things that are not naturally fearful will not be feared. He offers, as an example of the proper kind of education in this respect, an account of what he would do to keep Émile from becoming afraid of masks. He would begin with a pleasant mask, proceed to less pleasing, and, finally, hideous ones, all the while laughing at each mask and trying it on different persons. Similarly, to accustom Émile to the sound of a gun, Rousseau would start with a small charge, so that Émile will be fascinated by the sudden flash, then proceed to greater charges, until Émile can tolerate even large explosions.

Rousseau maintained that cries and tears are the child’s natural expression of needs. The child should not be thwarted, because there is no other way to learn to live in the world, and education begins with birth. On the other hand, the child should not be allowed to control the house, demanding obedience from the parents.

It was Rousseau’s conviction that children must be given more liberty to do things for themselves so that they will demand less of others. A natural advantage of the child’s limited strength is that a child...