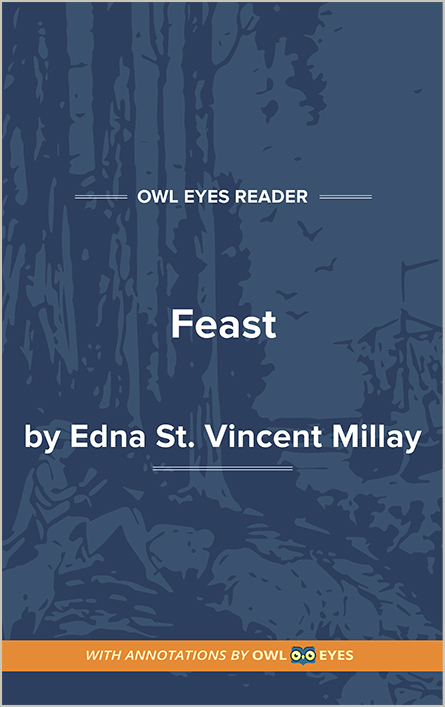 Great fame and wealth were victories Edna St. Vincent Millay won over the hardships, neglect, and poverty of her childhood. The eldest of three daughters born to Henry and Cora Millay, she was named after St. Vincent’s Hospital, where Cora’s brother had just miraculously recovered from unconsciousness after being trapped in the hold of a ship for ten days without food or water. When Vincent, as her family called her, was only eight years old, her father left home, never to pay the five dollars a week in child support ordered after the divorce. That same year the three daughters nearly died of typhoid fever. Forced to eke out a living as a country nurse and a weaver of hair for wigs, Cora was gone for days at a time, leaving Vincent to care for herself and two sisters, Norma and Kathleen.

To relieve the loneliness and drudgery, when their loving mother was home she entertained the children with music and poetry, nurturing the talents that enabled Vincent to escape the domestic duties that deterred many women from independence and success. Millay later recalled the moment she fell in love with poetry. Turning the pages of her mother’s large volume of William Shakespeare’s plays, she was overwhelmed by Romeo’s death speech on Juliet’s beauty.

Such early experiences pointed the way to themes which she later explored in her poems: love and loss, nature and change, life and death, art and beauty, justice, equality, and the predicament of women in American society.

Her literary abilities surfaced in high school in Camden, Maine, where she edited the student newspaper and wrote some poems published in St. Nicholas Magazine. Then in 1911, on a visit to attend her ill father, she began “Renascence,” the poem which would make her famous. She submitted it to a contest sponsored by the New York publisher Mitchell Kennerley. Although she did not win the prize, the poem’s publication in The Lyric Year (1912) attracted the attention of famous poets and literary critics.

Millay was offered a scholarship to Smith College, but she went to Vassar instead because its student body was more diverse, with women from around the world. There she acted in school plays, wrote a drama called The Princess Marries the Page (1932), and earned a bachelor’s degree, though she was barred from the graduation ceremony in 1917 for persistently breaking the college’s rules.

Next she traveled to Greenwich Village, where she joined the Provincetown Players and met Floyd Dell and Max Eastman, editors of a radical magazine, The Masses, which was then under indictment for discouraging enlistment in the armed forces during World War I. Though juries failed to convict the publishers, their magazine went out of business. Love affairs with Dell, Edmund Wilson, Arthur Davison Ficke, and others drew Millay closer to the leftist literary and political avant-garde in New York. She wrote and directed an antiwar play, Aria da Capo (1920), began writing short stories (under the pseudonym Nancy Boyd), and continued to publish poems in popular magazines.

Then came A Few Figs from Thistles (1920). Its poems were saucy, defiant, witty little works sharply differing in tone from the serious, mystical “Renascence.” A generation of young people found a metaphor for their own lifestyles in the surprising image in “First Fig:”

My candle burns at both ends;It will not last the night;But ah, my foes, and oh, my friends—It gives a lovely light!

Dash guilt and sorrow, Millay was telling women; instead, seize the day with the boldness of men. Love must be free, not bound by unbreakable vows. Such gallant verse made her the most widely read poet in the United States.

Newly earned fame and money enabled her to travel from Greenwich Village to Rome, Vienna, Hungary, Albania, England, and the Left Bank in Paris. From time to time and place to place she engaged in notorious love affairs with women as well as with men. Her health was failing, however, and in 1922 her mother joined Millay...