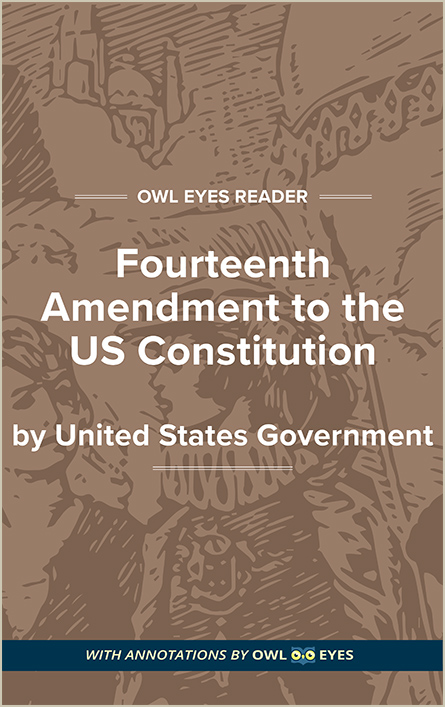 Vocabulary in Fourteenth Amendment to the US Constitution

Vocabulary Examples in Fourteenth Amendment to the US Constitution:

Text of the Amendment

The verb “abridge” means to “lessen” or “shorten.” The word can be traced back to the Latin abrevio, which means “to make brief.” In this context, the amendment prevents the states from removing or diminishing the rights of citizens.

"jurisdiction..."  See in text (Text of the Amendment)

The noun “jurisdiction” refers to the exercising of judicial and legal authority. The word derives from the Latin roots juris, meaning “law,” and dicere, meaning “to say”—thus the most essential meaning of “jurisdiction” is “declaration of law.” To be “subject to the jurisdiction” of the United States is to be subject to the nation’s laws and law enforcement.

"born or naturalized in the United States..."  See in text (Text of the Amendment)

The first section of the amendment officially grants citizenship to “all persons born or naturalized in the United States.” This is commonly referred to as the Citizenship Clause. “Naturalized” people are foreigners who have applied for and attained American citizenship. To “naturalize”—a verb derived from French—essentially means “to make native.” This clause is crucial in that it defines who receives citizenship status. Because anyone born in the US is automatically a citizen, the vast majority of freed slaves are recognized as citizens under this amendment.

The noun “void” generally refers to an absence or nothingness. As an adjective in legal and financial contexts, it acquires a more refined definition: if something is void, it has no binding, legal force, making it invalid or ineffectual.

"insurrection..."  See in text (Text of the Amendment)

The noun “insurrection” refers to an act of rebellion, such as an armed uprising, a revolt, or any other instance of open resistance against an established authority. The inclusion of “insurrection” and “rebellion” expands the scope of section 3 to include any offenses made against the United States. This section gave Congress broad power to be highly selective of the former Confederates who could serve in elected office.