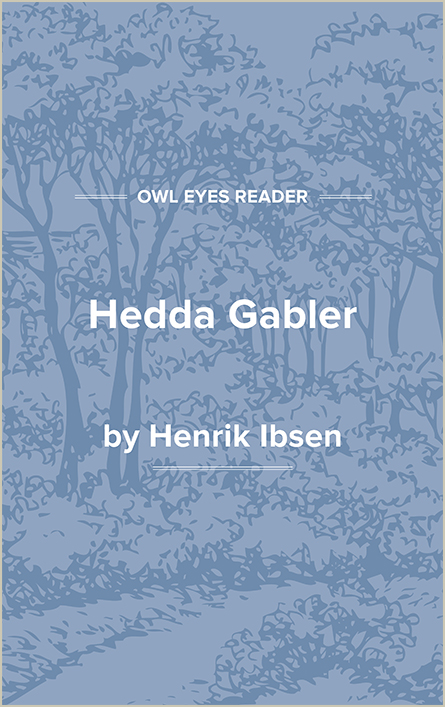 While the familiar Ibsenian patterns remain intact in Hedda Gabler, the conflict is no longer rooted in ideology. Though she loved the glamorous and dissolute Eilert Løvborg, fear of scandal and of her own repressed sexuality prevented Hedda Gabler from giving her love free rein. As a last resort, she has married George Tesman, a humdrum, middle-class historian, whom she does not love. While George is astonished that he has had the good fortune to marry the daughter of the late General Gabler, Hedda is despondent to find herself trapped in the hopelessly bourgeois Tesman family. George and Hedda both have returned from their long wedding trip with expectations: George fully expects to be appointed to a professorship, and Hedda, much to her dismay, is expecting Tesman’s child. George has assumed that the appointment will automatically be his, because Eilert Løvborg, his only serious rival, has long suffered from acute alcoholism. He soon learns, however, that Eilert has stopped drinking and has published a very successful book. He is not aware, however, that Eilert is still deeply in love with Hedda.

Eilert has recently completed another book, which promises to be his masterpiece. When Thea Elvsted, the wife of Eilert’s former employer, beseeches Tesman to keep an eye on Eilert because she fears that he may start drinking again, Hedda is intrigued. Without difficulty, she gets Thea to admit that, though she has managed to reform Eilert, she has never been able to win his love because he is still haunted by the shadow of another woman. Thea is unaware that Hedda is that woman, and Hedda is extremely gratified to learn that she may still exercise great power over Eilert. She puts this power to the test when she successfully tempts him to take a drink and then to accompany George to a party. Hedda wants to shape Eilert’s destiny by freeing him from fear of alcoholism. Though she assures Thea that he will return “with vine leaves in his hair,” by which she means that his debauchery will have been translated into Dionysian creativity, she is also aware that he may instead succumb to his weakness. Either way, she will have gained control over him.

Unable to control himself, Eilert becomes so drunk at the party that he loses the manuscript of his new book. Tesman, who finds it, entrusts it to Hedda for safekeeping. When the distraught Eilert enters near the end of act 3, he tells Hedda and Thea that he has destroyed the manuscript. Thea, who regards this book as her and Eilert’s “spiritual child,” is crushed. After Thea’s...