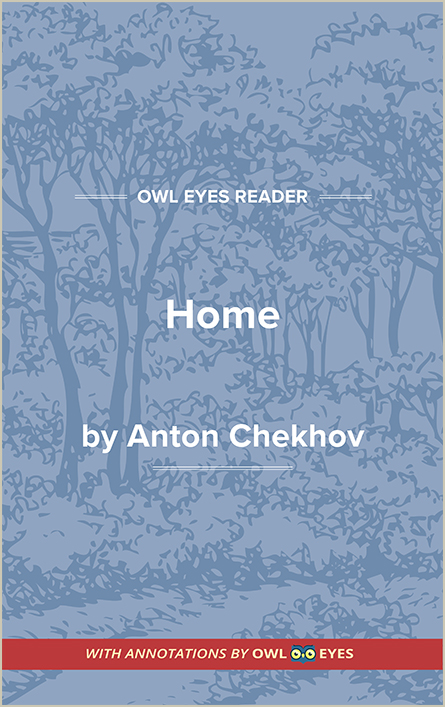 Free Indirect Discourse: Chekhov was an author of the realist school and wrote stories that spoke to the reality of human experience. One of the techniques that helped convey his sense of realism was free indirect discourse, which allows readers to imperceptibly slip in and out of the minds of the characters. Throughout the story, readers are able to look into the inner workings of Yevgeny’s mind through parenthetical interjections and a stream-of-consciousness literary style.

Biblical Allusions: In order to highlight Seryozha’s innocence, Chekhov makes use of biblical allusions. He compares the boy to a “cherub,” a winged, child-like angel. This comparison helps compound the young boy’s innocence and purity.

Symbolic Use of Numbers: Seryozha’s naivete stands in stark contrast with Yevgeny’s rigid, prosecutorial manner of thought. One way that highlights Yevgeny’s thought process is the use of numbers. Everything in Yevgeny’s space is ordered in terms of numbers, including the eight-note scales heard in the background and Seryozha’s drawing of a bayonet which resembles the number four.

"Overhead the scales could no longer be heard, but the inhabitant of the second storey was still pacing from one end of the room to another...."  See in text (Text of the Story)

These last sounds echo Yevgeny’s musings. After Seryozha heads to bed, the sound of the lulling piano quiets; all that remains, is the sound of the metronomic, ordered pacing. This final image lends to a sense of harmony after Yevgeny is able to convince Seryozha to stop smoking.

Adam, the first human created according to Jewish and Christian theology, serves as a biblical allusion to the Genesis story, which details the creation of earth and humankind. By mentioning Adam, Yevgeny speaks to the universality and timelessness of storytelling.

"Yevgeny Petrovitch sat down to the table and pulled one of Seryozha's drawings to him. In it there was a house with a crooked roof, and smoke which came out of the chimney like a flash of lightning in zigzags up to the very edge of the paper; beside the house stood a soldier with dots for eyes and a bayonet that looked like the figure 4...."  See in text (Text of the Story)

Yevgeny’s world is like a courtroom: one of logic, order, and methodology. He cannot comprehend why his son would draw something so unlike his reality and finds fault with the crooked roof, the zigzagging lightning bolt, and the soldier who stands taller than a house. In his effort to understand the drawing, Yevgeny even compares the shape of the bayonet to the shape of the number four. In contrast, Seryozha makes sense of the disproportionally large soldier, because, he claims, that if he drew the soldier any smaller, “you would not see his eyes.” While Yevgeny cannot fathom a world of disorder, Seryozha finds logic in it.

"Death carries mothers and uncles off to the other world, while their children and violins remain upon the earth...."  See in text (Text of the Story)

Seryozha’s naive and poetic understanding of death is captured in Chekhov’s imagery. He does not see death as final; rather, he envisions death as the transport of loved ones from the earth to the “sky beside the stars.”

This parenthetical interjection, unlike the others, employs irony. Yevgeny is attempting to prevent his son from smoking, despite the fact that he smokes himself. Yevgeny recognizes that his logic is irrational, and jokes to himself about how clever he is.

"("I am not saying the right thing!" thought Yevgeny Petrovitch.)..."  See in text (Text of the Story)

This is the first instance of an interjection formatted within parentheses. Fyodor Dostoevsky, Chekhov’s literary predecessor, was one of the first authors to use parenthetical interjections. For example, in Dostoevsky's novella Notes from Underground (1864), the author inserts parentheses to speak directly to the reader. In Chekhov’s story, the internal monologues, some of which are formatted within parentheses, have a similar effect. They provide space for asides and digressions that allow the reader to glimpse into the internal dialogue of a character’s mind.

"He was a child whose sex could only have been guessed from his dress: weakly, white-faced, and fragile. ..."  See in text (Text of the Story)

This description plays into the image of the boy as an Edenic, virginal cherub. All of these descriptors associate the boy with purity and fragility. Everything about him is soft, down to the velvet on his jacket. He is even likened to a “hot-house plant,” which is a sort of plant that requires certain greenhouse conditions to survive. With the use of this simile, Chekhov suggests that Seryozha needs a nurturing environment in order to flourish.