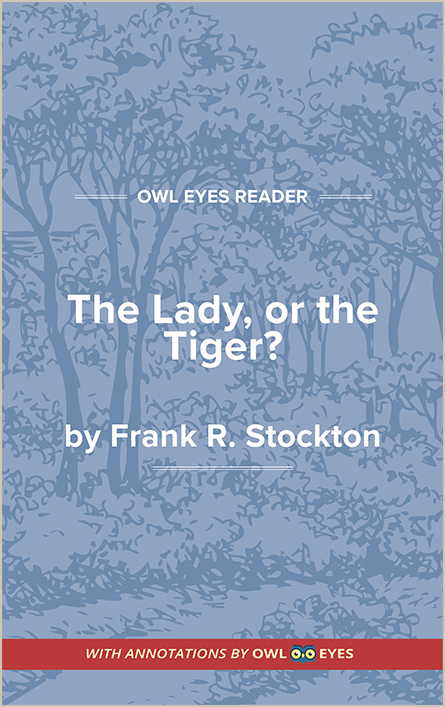 Allusion in The Lady, or the Tiger?

Historical Allusions: Although the story is set in an imaginary time and place, Stockton references “Latin neighbors.” The Latin neighbors are an allusion to the Roman Empire, and to the Romans, any non-Roman was a barbarian. This Roman view of barbarians as savage, uncivilized people offers useful context for the “semi-barbarian” king. Rome expanded northwards into Gaul (now known as Germany, France, and England), which resulted in the Gallic Wars. These wars lasted from 58-51 BCE and are famously recorded in Julius Caesar’s Commentarii de Bello Gallico (Commentary on the Gallic Wars). After Rome conquered Gaul, the tribes began to adopt a more Roman culture. Organized militaries, democratic governments, and Roman justice systems became more and more prominent. The king is described as “semi-barbaric,” indicating an internal struggle between his Roman and non-Roman characteristics. Just like the king, the Gallic tribes were internally split during their assimilation to Roman culture. While some tribes went willingly to the Roman way of life, others rebelled against it until they either surrendered or were wiped out. The king, like the tribes, are unsure as to which identity is more true: savage or civilized.

Literary Allusions: This story uses archetypes that are found in almost every fantasy story. Stockton relies on the Prince Charming, Jealous Princess, and Vengeful King character archetypes to tell his story of love and consequence. The story is also a formulaic fantasy tale. It takes place in a far-away land that is foreign enough to be exciting yet familiar enough to relate to. True to formula, there is a trial that the young man completes in which he is guided by his undying love of the princess. However, Stockton twists the archetypal story by withholding the ending from the reader. By leaving the ending open, Stockton takes the traditional fairy tale and turns it on its head.

Allusion Examples in The Lady, or the Tiger?:

"Among his courtiers was a young man of that fineness of blood and lowness of station common to the conventional heroes of romance who love royal maidens...."  See in text (The Lady, or the Tiger?)

The introduction of the lover is where the story begins to take on a fantastical tone. The archetypal characters were always implicit, hidden beneath a thinly veiled historical realism, but now the Evil King, the Jealous Princess, and the Prince Charming really come into the spotlight in their recognizable forms.