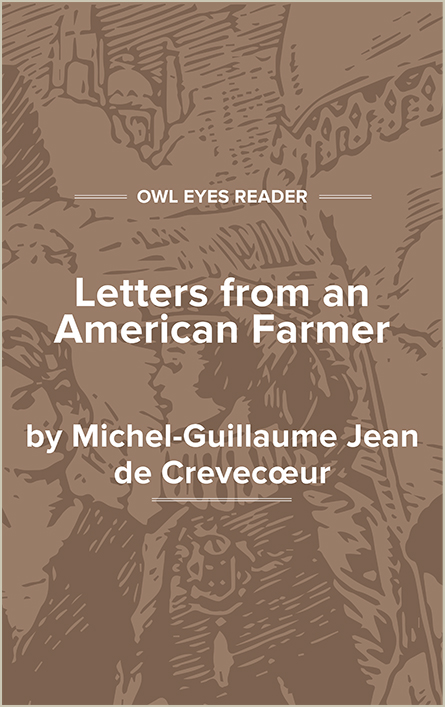 Letters from an American Farmer

Excerpt from Letters from an American Farmer Written in 1782

A French immigrant writes about the advantages of being an American: "The American is a new man, who acts upon new principles; he must therefore entertain new ideas, and form new opinions. From involuntary idleness, servile dependence, penury and useless labour, he has passed to toils of a very different nature, rewarded by ample subsistence. — This is an American."

In 1782, a French immigrant to North America, Hector St. John de Crèvecoeur (1735–1813), published a series of essays titled Letters from an American Farmer. It was one of the first presentations of the idea that settlers in the newly independent United States would constitute a new nationality based on a shared dream of freedom and equality. The American, he declared, would be distinct from the various European nationalities from which Americans had originated. De Crèvecoeur had no way of knowing when he wrote his essay in 1782 just how complex the question of American nationality would become. But his idea, written midway between the Declaration of Independence (1776) and the adoption of the Constitution of the United States (1788)—milestone documents that established the United States as a nation—laid out an ideal that became popular in the American imagination, even if it fell far short of the reality of a nation of immigrants.