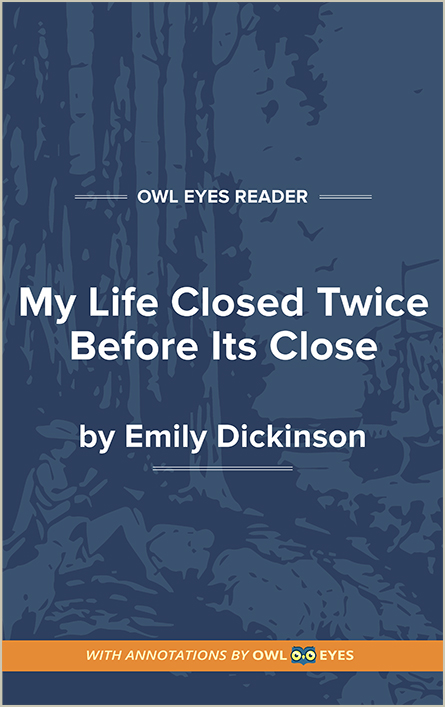 Themes in My Life Closed Twice Before Its Close

Themes Examples in My Life Closed Twice Before Its Close:

The final two lines can be read as revealing the rush of conflicting emotions felt in the process of loss and grief. “Heaven” and “hell” serve as figures for the speaker’s contrasting interior states. Loss, or “parting,” offers glimpses of heaven through the intense feelings of love for the lost person. It is also a hellishly painful experience, and thus “all we need of hell.”

In the penultimate line, the speaker approaches the mystery of death and reaches an epistemological roadblock. All the speaker can know of the afterlife is through “parting,” experiencing the death of a loved one. The death of another, however, does not reveal the existence of heaven or an afterlife. Thus, it is “all we know of heaven,” but still not enough. The inability to understand the nature of death and the afterlife surely contributes to the “hell” of loss alluded to in the final line.

The word “unveil” suggests that the speaker holds a passive perspective. Life’s events are to be “unveil[ed],” rather than chosen through acts of will. There is a sense of fate, as if the occasions of one’s life already exist, waiting only to be revealed.

The speaker alludes to two metaphorical deaths that have elapsed. From its start, the poem is intensely conscious of mortality, referring to the end of the speaker’s life—“its close”—well before the event. The nature of these deaths is not specified, but we can assume they are instances of great loss: deaths or departures of loved ones. The impact of grief and tragedy on one’s life is the poem’s central theme.

As with many of Dickinson's poems, death is a central motif and source of mystery. Here, Dickinson uncharacteristically acknowledges the possibility of "Heaven," a pleasant afterlife that is, at the same time, capable of inflicting pain for the one who is left behind.