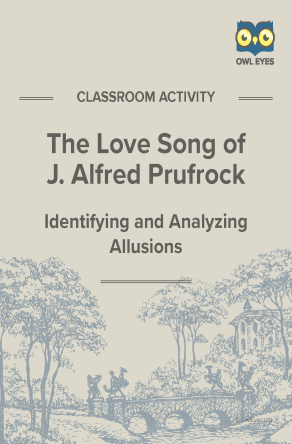 T.S. Eliot published “The Love Song of J. Alfred Prufrock,” his first major poem, in 1915. It marked the start of Eliot’s career, as well as the onset of modernism, a movement of artists whose work was intensely self-reflective. In his essays, Eliot expressed his opinion that a poet must absorb the entire literary canon before attempting to create something new. “The Love Song of J. Alfred Prufrock” exemplifies this method. Eliot’s poem is a dramatic monologue that unfolds from the perspective of the titular Mr. Prufrock, a shy and indecisive man adrift in the streets of London. Its lines, brimming with allusions from Hesiod to Dante, display Eliot’s vast learning.