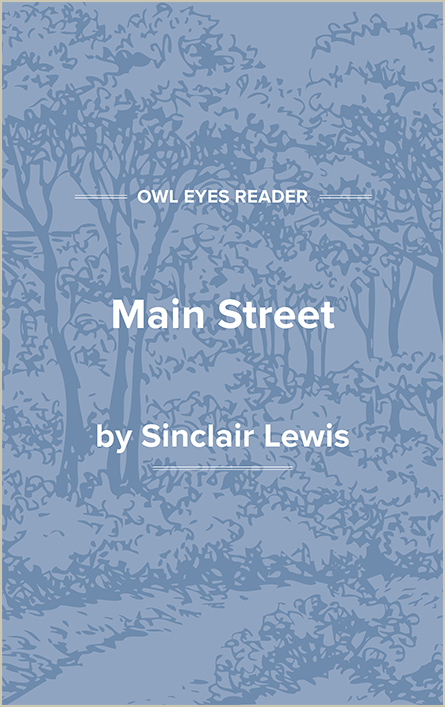 This is America—a town of a few thousand, in a region of wheat and corn and dairies and little groves. The town is, in our tale, called "Gopher Prairie, Minnesota." But its Main Street is the continuation of Main Streets everywhere. The story would be the same in Ohio or Montana, in Kansas or Kentucky or Illinois, and not very differently would it be told Up York State or in the Carolina hills. Main Street is the climax of civilization. That this Ford car might stand in front of the Bon Ton Store, Hannibal invaded Rome and Erasmus wrote in Oxford cloisters. What Ole Jenson the grocer says to Ezra Stowbody the banker is the new law for London, Prague, and the unprofitable isles of the sea; whatsoever Ezra does not know and sanction, that thing is heresy, worthless for knowing and wicked to consider. Our railway station is the final aspiration of architecture. Sam Clark's annual hardware turnover is the envy of the four counties which constitute God's Country. In the sensitive art of the Rosebud Movie Palace there is a Message, and humor strictly moral. Such is our comfortable tradition and sure faith. Would he not betray himself an alien cynic who should otherwise portray Main Street, or distress the citizens by speculating whether there may not be other faiths?