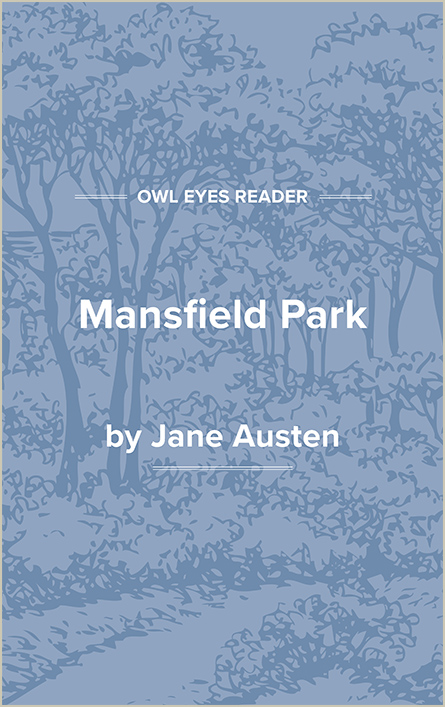 Jane Austen (OWS-tuhn) was the seventh of eight children, the second daughter of a rural clergyman respected for his learning and literary taste. Two of her brothers followed their father to Oxford University and into the church; two others rose to be admirals in the navy. Except for brief schooling in Oxford, Southampton, and Reading, which ended at the age of nine, Austen was educated at home, where she learned French, a smattering of Italian, and some history and gained a thorough acquaintance with the essayists, novelists, and poets of the eighteenth century as well as with the works of William Shakespeare and John Milton.

Always somewhat shy but lively and witty, Austen developed into a young lady of cultivated manners and pleasing appearance, who at balls and assemblies enjoyed her share of masculine attention. A brief but genuine romance with a young man whose identity is uncertain ended with his death. When she was nearly twenty-seven, she accepted, and the next day rejected, the marriage proposal of Harris Bigg-Wither, a friend of long standing, whom she realized she did not love.

Aside from writing, Jane Austen devoted her life to domestic duties and household affections and especially to being the companion and confidante of many of her nieces and nephews, who found her unfailingly kind, sympathetic, and amusing.

Having spent the first twenty-five years of her life in the rectory at Steventon, she moved in 1801, upon her father’s retirement, with her parents and sister Cassandra to Bath. After her father’s death in 1805 and a sojourn of three years in Southampton, she settled with her mother and sister in a cottage belonging to her brother Edward at Chawton, Hampshire, where she resided until two months before her death. There, working mainly in the general sitting room, she composed the final drafts of all her major works, hurriedly slipping the small sheets under the blotting paper if a visitor or servant appeared. In 1816 her health began to fail, and in May, 1817, she and Cassandra moved to Winchester for adequate medical attention. Despite weakness and pain, she remained cheerful to the end. She died peacefully on July 18, 1817, at the age of forty-one and was buried in Winchester Cathedral.

Jane Austen’s novels, the first published when she was thirty-five and followed by five others in as many years, were the final fruits of an early and painstaking apprenticeship to literature. Three small volumes of juvenilia, written by the time she was eighteen years old, bear witness to her youthful talent for mimicry and burlesque; they also contain her first serious piece, “Catharine, or the Bower,” in which she anticipates Northanger Abbey. Her first completed novel, First Impressions (the lost original of Pride and Prejudice), was begun in October, 1796, and finished in August, 1797; her father offered the manuscript to a publisher without success. In November, 1797, she started Sense and Sensibility. The next year she wrote Northanger Abbey, a revised version of which, titled Susan, she sold in 1803 for ten pounds to the publisher Crosby, who advertised but failed to publish it. Finally retrieved in 1816, an amended text appeared posthumously in 1818. The Watsons, a fragmentary progenitor of Emma, and Lady Susan, a biting epistolary satire, probably the germ of Mansfield Park, have survived in manuscripts written on paper watermarked 1803 and 1805, respectively. Extensively revised or rewritten in 1809-1811, Sense and Sensibility was published on October 31, 1811. The book was favorably received, and the edition sold out in less than two years, bringing its author 140 pounds. Pride and Prejudice appeared in 1813, Mansfield Park in 1814, and Emma in 1815. Persuasion was issued with Northanger Abbey in 1818, and by that date Sense and Sensibility and Mansfield Park had reached a second edition and Pride and Prejudice a third. Austen was engaged on a rough draft of the early chapters of a new novel, Sanditon, only a few weeks before she died.