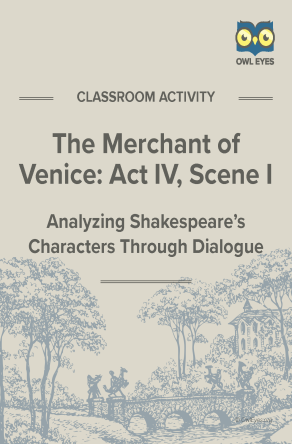 Written in 1596, The Merchant of Venice is set in Venice, Italy. The plot focuses on the friendship between the merchant Antonio and Bassanio, a young man without means who seeks to marry Portia, an heiress. Driven to help Bassanio, Antonio finances the courtship by borrowing money from Shylock, a Jewish moneylender who despises him. Shylock makes the loan with the provision that Antonio will repay it with a pound of his own flesh if he is unable to settle his account by the appointed time. Ultimately, Antonio is unable to repay his loan, and Shylock demands that the Duke of Venice enforce the brutal terms of the bond. In act IV, scene I, Shylock meets Antonio in court to collect his pound of flesh. Other major characters are present during the dramatic confrontation, including Bassanio, his friend Gratiano, and Portia, who is disguised as a learned counselor to the court. Their characters, as well as Shylock’s and Antonio’s, are further developed through the dialogue. Note: the anti-Semitic perspectives in the scene reflect the strong anti-Semitism prevalent in England during Shakespeare’s time. For more on this, refer to our historical context page.