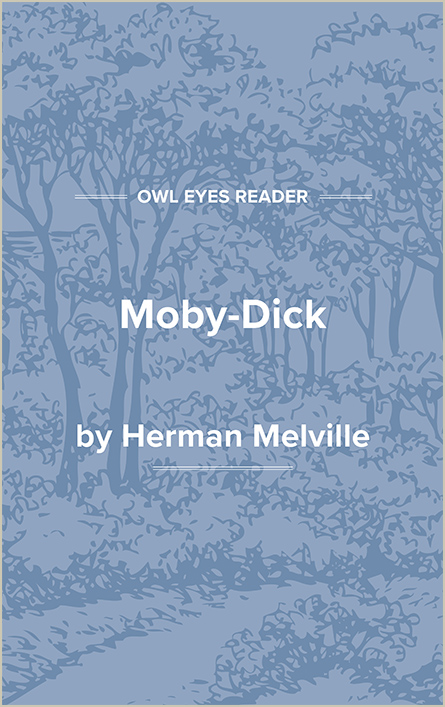 Ishmael is a schoolmaster who often feels that he must leave his quiet existence and go to sea. Much of his life has been spent as a sailor, and his voyages are a means of ridding himself of the restlessness that frequently seizes him. One day, he decides that he will sign on a whaling ship, and packing his carpetbag, he leaves Manhattan and sets out, bound for Cape Horn and the Pacific.

On his arrival in New Bedford, Ishmael goes to the Spouter Inn near the waterfront to spend the night. There he finds he can have a bed only if he consents to share it with a harpooner. His strange bedfellow frightens him when he enters the room, for Ishmael is certain that he is a savage cannibal. After a few moments, however, it becomes evident that the native, whose name is Queequeg, is a friendly person, for he presents Ishmael with an embalmed head and offers to share his fortune of thirty dollars. The two men quickly become friends and decide to sign on the same ship.

Eventually they sign on the Pequod, a whaler out of Nantucket, Ishmael as a seaman, Queequeg as a harpooner. Although several people seem dubious about the success of a voyage on a vessel such as the Pequod, which is reported to be under a strange man, Captain Ahab, neither Ishmael nor Queequeg has any intention of giving up their plans. They are, however, curious to see Captain Ahab.

For several days after the vessel has sailed, there is no sign of the Captain, as he remains hidden in his cabin. The running of the ship is left to Starbuck and Stubb, two of the mates, and though Ishmael becomes friendly with them, he learns very little more about Ahab. One day, as the ship is sailing southward, the Captain strides out on deck. Ishmael is struck by his stern, relentless expression. In particular, he notices that the Captain has lost a leg and that instead of a wooden leg, he now wears one cut from the bone of the jaw of a whale. A livid white scar runs down one side of his face and is lost beneath his collar, so that it seems as though he were scarred from head to foot.

For several days, the ship continues south looking for whale schools. The sailors take turns on masthead watches to give the sign when a whale is sighted. Ahab appears on deck and summons all his men around him. He pulls out a one ounce gold piece, nails it to the mast, and declares that the first man to sight the great white whale, known to the sailors as Moby Dick, would get the gold. Everyone expresses enthusiasm for the quest except Starbuck and Stubb, Starbuck especially deploring the madness with which Ahab has directed all his energies to this one end. He tells the Captain that he is like a man possessed, for the white whale is a menace to those who would attempt to kill him. Ahab lost his leg in his last encounter with Moby Dick; he might lose his life in the next meeting, but the Captain does not listen to the mate’s warning. Liquor is brought out and, at the Captain’s orders, the crew drinks to the destruction of Moby Dick.

Ahab, from what he knows of the last reported whereabouts of the whale, plots a course for the ship that will bring it into the area where Moby Dick is most likely to be. Near the Cape of Good Hope, the ship comes across a school of sperm whales, and the men busy themselves harpooning, stripping, melting, and storing as many as they are able to catch. When the ship encounters another whaling vessel at sea, Captain Ahab asks for news about the white whale. The captain of the ship warns him not to attempt to chase Moby Dick, but it is clear by now that nothing can deflect Ahab from the course he has chosen.

Another vessel stops them, and the captain of the ship boards the Pequod to buy some oil for his vessel. Captain Ahab again demands news of the whale, but the captain knows nothing of the monster. As the captain is returning to his ship, he and his men spot a school of six whales and start after them in their rowboats. While Starbuck and Stubb rally their men into the Pequod ’s boats,...