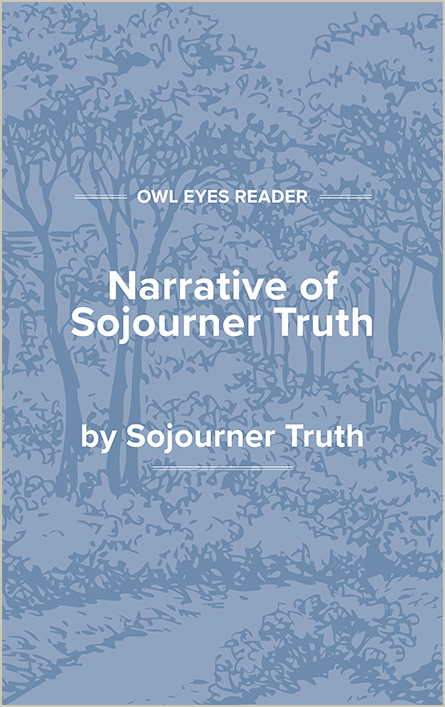 THE SUBJECT OF THIS biography, Sojourner Truth, as she now calls herself—but whose name originally was Isabella was born, as near as she can now calculate, between the years 1797 and 1800. She was the daughter of James and Betsey, slaves of one Colonel Ardinburgh, Hurley, Ulster County, New York. Colonel Ardinburgh belonged to that class of people called Low Dutch. Of her first master, she can give no account, as she must have been a mere infant when he died; and she, with her parents and some ten or twelve other fellow human chattels, became the legal property of his son, Charles Ardinburgh. She distinctly remembers hearing her father and mother say, that their lot was a fortunate one, as Master Charles was the best of the family,—being, comparatively speaking, a kind master to his slaves. James and Betsey having, by their faithfulness, docility, and respectful behavior, won his particular regard, received from him particular favors—among which was a lot of land, lying back on the slope of a mountain, where, by improving the pleasant evenings and Sundays, they managed to raise a little tobacco, corn, or flax; which they exchanged for extras, in the articles of food or clothing for themselves and children. She has no remembrance that Saturday afternoon was ever added to their own time, as it is by some masters in the Southern States.