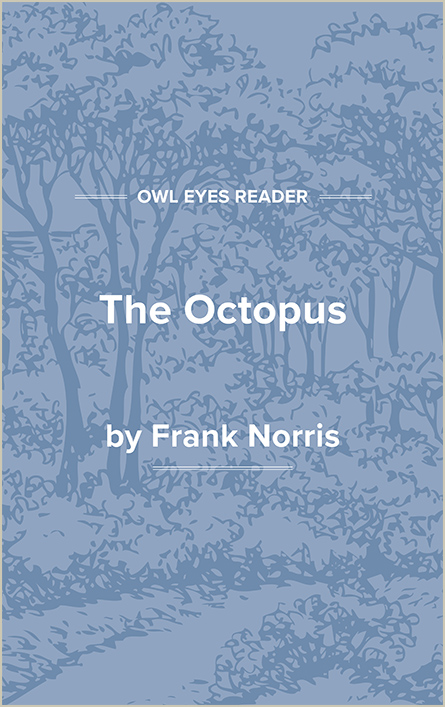 Just after passing Caraher's saloon, on the County Road that ran south from Bonneville, and that divided the Broderson ranch from that of Los Muertos, Presley was suddenly aware of the faint and prolonged blowing of a steam whistle that he knew must come from the railroad shops near the depot at Bonneville. In starting out from the ranch house that morning, he had forgotten his watch, and was now perplexed to know whether the whistle was blowing for twelve or for one o'clock. He hoped the former. Early that morning he had decided to make a long excursion through the neighbouring country, partly on foot and partly on his bicycle, and now noon was come already, and as yet he had hardly started. As he was leaving the house after breakfast, Mrs. Derrick had asked him to go for the mail at Bonneville, and he had not been able to refuse. He took a firmer hold of the cork grips of his handlebars--the road being in a wretched condition after the recent hauling of the crop--and quickened his pace. He told himself that, no matter what the time was, he would not stop for luncheon at the ranch house, but would push on to Guadalajara and have a Spanish dinner at Solotari's, as he had originally planned.