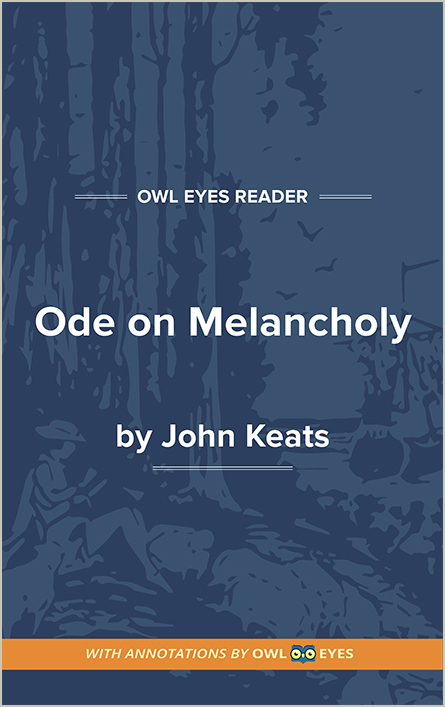 Vocabulary in Ode on Melancholy

Vocabulary Examples in Ode on Melancholy:

"Or if thy mistress some rich anger shows, Emprison her soft hand, and let her rave, And feed deep, deep upon her peerless eyes...."  See in text (Ode on Melancholy)

Keats furthers the idea of melancholy as a gateway to appreciation. In the scene of a quarrel between lovers, Keats turns the mistress’s rage into “rich anger” and attends to “her soft hand.” The final line of the stanza finds beauty in the enraged mistress’s eyes. Keats creates emphasis by repeating the hard e sound in “feed deep, deep” and “peerless.” There is a clever pun in “peerless”: On one level, the word means “matchless,” without peer. On another, it means the mistress’s eyes cannot “peer,” or see, in the way her melancholic lover can. Her rage does not allow for the same appreciative vision.

"For shade to shade will come too drowsily, And drown the wakeful anguish of the soul...."  See in text (Ode on Melancholy)

Keats uses “shade” here in two different senses. The first “shade” refers to drug-induced oblivion. The second “shade” is the addressee, the melancholy person; “shade” in this usage means “ghost” or “soul.” Keats creates a subtle transition between the two lines in the “drowsily”/“drown” rhyme. The thesis of this couplet is that one should not “drown the wakeful anguish” because, as will become clear, melancholy is an important emotion.

"Wolf's-bane, tight-rooted, for its poisonous wine;..."  See in text (Ode on Melancholy)

“Wolf’s-bane” is a colloquial name for the Aconitum genus of flowers, the majority of which are known for being incredibly poisonous. Like many of Keats’s references and images, Wolf’s-bane figures prominently in Greek myths: the witch Medea tried to poison Theseus with it, and the flower is said to have originated in the drooling mouth of Cerberus. The subtle allusion to Cerberus, the guard hound of the Underworld, is important. In the first stanza, the speaker urges melancholic souls not to drug themselves to death.