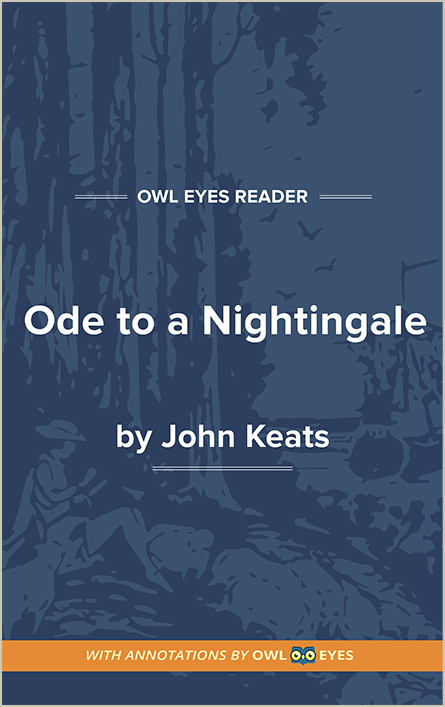 Allusion in Ode to a Nightingale

Allusion Examples in Ode to a Nightingale:

"light-wingéd Dryad of the trees,..."  See in text (Ode to a Nightingale)

Keats laces many of his poems with classical imagery and allusion. From the Dryad—a kind of nymph—to the goddess Flora and the Hippocrene, Keats draws upon figures and places from Greek lore to give the poem a timeless, mythic quality.

The River Lethe is one of the four rivers of the Greek underworld. It is the river of oblivion, whose waters souls must drink so as to forget their past lives. In the first several stanzas, Keats’s speaker entertains the appeal of pleasure and forgetfulness before moving towards an engagement with the pain of life and death.

"Hippocrene..."  See in text (Ode to a Nightingale)

In Greek mythology, "Hippocrene" is the name of a fountain on Mt. Helicon, sacred to the Muse; when drunk, the water was supposed to evoke poetic inspiration.

In the Old Testament of the Bible, Ruth is a widow who travels to a foreign land with her widowed mother-in-law. Eventually, Ruth becomes the great-grandmother of King David.