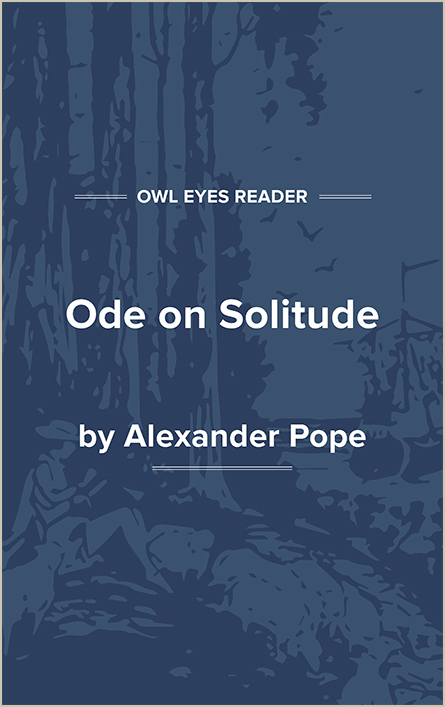 Alexander Pope was born in the City of London, England, on May 21, 1688, the year of the Glorious Revolution. He was the only child of Catholic parents. The Pope family lived on Lombard Street until Alexander was five years old. A portrait of him painted when he was about ten shows his face to be round, pretty, and of a fresh complexion. Later, an illness disfigured him. In the same year that he was born, an act of Parliament prohibited Catholics from living within ten miles of the City of London. This act became a major factor in determining the course of Pope’s life.

Pope received his first education when he was about eight years old from a priest named John Banister. Later, he attended Twyford School near Winchester, a school for Catholic boys. At the age of twelve, Pope’s father decided to move the family from London in order to conform to the act restricting Catholics. Whitefield House and seventeen acres of land in Windsor Forest near Binfield became the new home. This move brought Pope’s formal education to an end, and thereafter he educated himself. About 1704, at the age of sixteen and now suffering from the dreaded Pott’s disease, a form of spinal tuberculosis, he thought he was about to die. His farewell to the Abbe Southcote caused him to secure the services of Dr. John Radcliffe, an eminent physician of the day, who successfully treated Pope. His advice to Pope, to exercise and ride each day, worked.

During these years of growing up at Binfield, the young poet was not only extending his reading and perfecting his poetry, he was also developing his literary acquaintances. He got to know many literary wits at Will’s Coffee House, including William Trumbell, William Walsh, Samuel Garth, William Wycherley, William Congreve, and the actor Thomas Betterton. Pope became especially friendly with Wycherley and Walsh. He helped Wycherley prepare his verse for publication, and from Walsh he received the famous advice to make correctness his study and aim. Walsh was referring, of course, to literary decorum.

These years were also a time of great expansion in his personal and social life. They mark a period during which Pope spent more time in London than at any other stage in his life at the same time as he continued to visit his Catholic acquaintances around Binfield. Now he made new friends, including John Gay, Jonathan Swift, John Arbuthnot, and First Viscount Bolingbroke among literary and political circles, and the Carylls, Englefields, and Blounts among Catholic folk. He also met Martha Blount, for whom he developed a love that, despite all barriers that existed, endured until his death.

When Pope’s father died in 1717, various changes in Pope’s life followed. His father had left Binfield in 1716 and moved to Chiswick, possibly to avoid the heavy taxes then being levied against Catholics. With his father gone, Pope decided to move in March, 1719, with his mother into a small villa on the bank of the Thames at Twickenham. The last twenty-five years of Pope’s life were spent there, except for occasional excursions into the countryside. His major endeavor now was to improve the house, garden, and grotto at Twickenham. His life took on a much quieter aspect. At first, he was engrossed in finishing his translation of Homer’s Iliad . After the completion of the translation, he began editing. His main project in editing was an edition of the work of William...