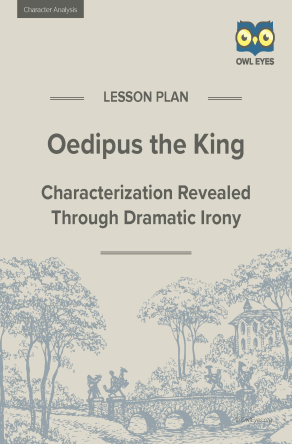 Characterization Revealed Through Dramatic Irony This lesson plan focuses on Sophocles’s use of dramatic irony in developing Oedipus’s character in the play. Students will identify specific examples of irony in the narrative, examine how they relate to character development, and analyze what they reveal about Oedipus. In studying dramatic irony in Oedipus the King, students will be better able to describe Oedipus and explain his motivations and behavior.

The myth of Oedipus has fascinated audiences since antiquity. Oedipus’s story explores the limits of human free will and exemplifies the doomed arc of the tragic hero. Shortly after the birth of their son Oedipus, Laius and Jocasta receive a prophecy that he will kill his father and marry his mother. To avoid this, they abandon him on a mountainside. Saved by a herdsman, Oedipus echoes his parents’ attempts to defy fate when confronted with the same prophecy years later. In attempting to change the course of their lives, Oedipus and his parents assert their own wills over those of the gods, unwittingly causing their prophecies to come to pass. For the ancient Greeks, this was considered hubris, or excessive pride, a tragic flaw warranting fatal punishment.

Sophocles dramatizes Oedipus’s story in Oedipus the King. It is the most famous of the 120 plays Sophocles wrote and was was first performed in Athens during the fifth century BCE. In addition to the theme of fate and free will, Oedipus the King explores social issues in Athens during Sophocles’s lifetime. At the time, Athens fought against Sparta for regional dominance in the Peloponnesian War. During the conflict, Delphi was associated with Sparta, a factor causing Athenians to question the validity of the Delphic oracles and their prophecies. In the same vein, Jocasta and Oedipus question Teiresias's wisdom and the prophecy about King Laius. As the play shifts from the search for Laius’s killer to the search for Oedipus’s identity, it comes to consider the thematic search for knowledge. As Oedipus searches for the truth about himself, audiences evaluate the choices Oedipus makes in his search.

Oedipus’s search for knowledge that the audience already holds gives rise to the play’s central dramatic irony. In his Poetics, Aristotle celebrates Oedipus the King as an exemplar of tragic drama in classical Greece. He describes Oedipus’s tragic flaw and consequential reversals of stations in life—from son to husband, from king to beggar, from sighted to blind, from ignorant to wise—as the perfect source of catharsis. Aristotle used the term catharsis to describe the audience’s experience while watching dramatic tragedy unfold. In the case of Oedipus the King, suspense builds in the audience as Oedipus spirals toward a doom they know is coming. The suspense is then released, or purged, when the audience experiences Oedipus’s agony with him at the end of the play. For Aristotle, catharsis builds empathy and emotional fortitude within those who watch the play.

The empathy and emotional fortitude that catharsis brings about are as valuable for audiences today as they were 2,500 years ago. While oracles and prophecies have faded from popular control, the drama at the heart of Oedipus the King is the drama at the heart of life. Like the Oedipus of myth and stage, humans continue to move through life making the best choices possible with limited information in a set of circumstances they cannot change.

Work with your group to read the passage and answer the questions below.

Say, sirrah, hast thou ever proved thyself
A prophet? When the riddling Sphinx was here
Why hadst thou no deliverance for this folk?
And yet the riddle was not to be solved
By guess-work but required the prophet's art;
Wherein thou wast found lacking; neither birds
Nor sign from heaven helped thee, but I came,
The simple Oedipus; I stopped her mouth
By mother wit, untaught of auguries.
This is the man whom thou wouldst undermine,
In hope to reign with Creon in my stead.
Methinks that thou and thine abettor soon
Will rue your plot to drive the scapegoat out.
Thank thy grey hairs that thou hast still to learn
What chastisement such arrogance deserves.