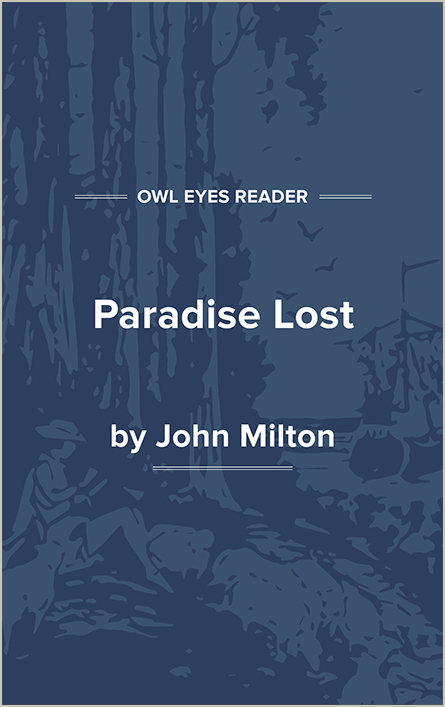 In the tradition of the epic poem, Paradise Lost begins in medias res, in the middle of the story, showing in the first two of twelve books how Satan and his followers gathered their forces on the burning lake of Hell and sought out the newly created race of humans on Earth. (The revolt and resulting war in Heaven that preceded this action and earned the devils their place in Hell is reported in books 5 and 6.)

In book 3, God observes Satan traveling toward Earth, predicts the fall of human beings, and asks for someone to ransom them. Christ, the Son, accepts. In book 4, Adam and Eve are introduced, as Satan lies hidden in the Garden of Eden. Satan appears in Eve’s dream, encouraging her to taste of the forbidden Tree of Knowledge, and in book 5 God sends the angel Raphael to warn Adam and Eve of their danger. Raphael begins the story of Lucifer’s revolt in Heaven, which he completes in book 6, and in book 7 Raphael tells of how God responded to Satan’s revolt by creating a new world, the earth, and a new race in Adam and Eve. In book 8, Adam describes to Raphael his and Eve’s creation, and Raphael delivers his final warning and departs. Book 9 tells the story of Satan’s successful temptation of Eve, the eating of the fruit of the Tree of Knowledge, and the resulting discord between Adam and Eve. In book 10, Christ passes judgment on Adam and Eve, and Sin and Death build a bridge from the gates of Hell to Earth as Satan is returning to Hell. At the end of book 10, Adam and Eve resolve their discord and petition God for forgiveness, which is granted in book 11 as God sends the archangel Michael to give Adam a vision of the future for humans. In book 12, after the vision of Christ’s sacrifice and redemption of the human race, Adam and Eve are expelled from Eden.

This brief synopsis, of course, does not communicate the grandeur and emotional intensity of Milton’s great poem. Milton begins Paradise Lost with two captivating books set in Hell and featuring Lucifer, or Satan, who rallies his defeated forces and vows eternal war on God before journeying toward Earth to destroy Adam and Eve. In Hell, Satan has a kind of heroic splendor, and such apparent grandeur led English Romantic poets such as William Blake and Percy Bysshe Shelley to identify with Satan as a tragic rebel and to proclaim that Milton subconsciously admired Satan. Although Milton’s subconscious mind must forever remain a mystery, this interpretation is very dubious, and generations of readers misled by Blake and his followers should read the poem more carefully. Milton began his epic with this larger-than-life portrait of Satan in order to provide God (who will obviously win) with a worthy adversary. Yet Satan’s pseudoheroic size is severely diminished in all of his appearances outside the first two books, and by the end of the poem Satan is not at all prominent, the heroic focus having shifted to the figure of Christ and the tragic focus having shifted to Adam and Eve. By the end of the poem, Satan is defeated and overshadowed by the larger themes of redemption and human responsibility.

One of the main causes of this Romantic distortion of Paradise Lost is the contrast between the first two books and book 3, where God the Father delivers theological lectures and clears Himself of blame for the Fall that He foretells but does not predestine. Compared to Hell and Satan, the figures of God and Christ the Son discoursing in Heaven seem dull, at least to most modern-day readers. It is almost with relief at the end of book 3 that the reader finds Milton returning to the description of Satan, who nears the Earth and passes through what is called the Paradise of Fools.

Only when the reader meets Adam and Eve is there a narrative interest to compete with Satan’s pseudoheroic stature, but the success...