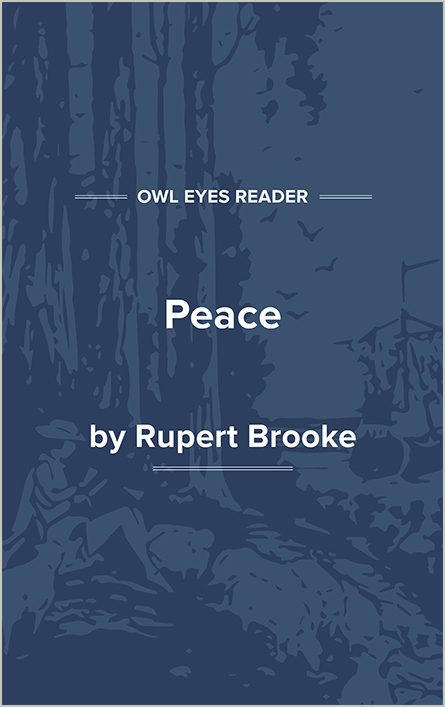 Rupert Brooke, the most popular English poet of the World War I period, was born at the famous Public School of Rugby, where his father was an assistant master. After attending Rugby, Brooke went to King’s College, Cambridge, in 1909. At the university he immediately plunged into all the intellectual activities there, joining the Apostles, the famous discussion group, and taking a leading role in the Cambridge Amateur Dramatic Society. All who knew him at Cambridge remembered his great personal charm and amazing good looks. However, Brooke’s stunning exterior covered a deeply divided and troubled mind. It was during this period that he joined the Fabian Society, the socialistic group to which belonged many intellectuals, including H. G. Wells and Sidney and Beatrice Webb.

After a reading trip with friends to Lulworth, he suffered a major breakdown and spent some time in Germany to recover, returning to the village of Grantchester near Cambridge. There he leased the Old Vicarage, the site of one of his most famous poems, “The Old Vicarage, Grantchester,” which he had written in Germany and originally planned to call “The Sentimental Exile.” While living at Grantchester, he prepared his dissertation on John Webster and published his first volume of poems in 1911.

In 1913 he embarked on a long journey that took him across the United States and Canada and eventually to the South Seas, where he spent some time in Samoa and Tahiti. It was in this Pacific paradise that he wrote some of his best poems, including “Tiare Tahiti” and “The Great Lover.”

Upon his return to England, he became involved with a glittering upper-class social set and fell in love with the actress Cathleen Nesbitt. Hardly had Brooke returned to England than World War I broke out. In spite of his early socialistic leanings, with the help of Winston Churchill he enlisted at once in the Royal Naval Division and took part in the futile attempt to defend Antwerp. In February of 1915 he sailed with the Mediterranean Expeditionary Force for the Dardanelles and the ill-fated Gallipoli expedition. Brooke died of blood poisoning on a French hospital ship in the Aegean Sea and was buried on the island of Scyros, Greece.

Brooke began writing poetry, mainly decadent, while a student at Rugby, and during his undergraduate years he acquired a reputation as a promising younger poet. Through the patronage of Edward Marsh, he became associated with the group known as the Georgians, who...