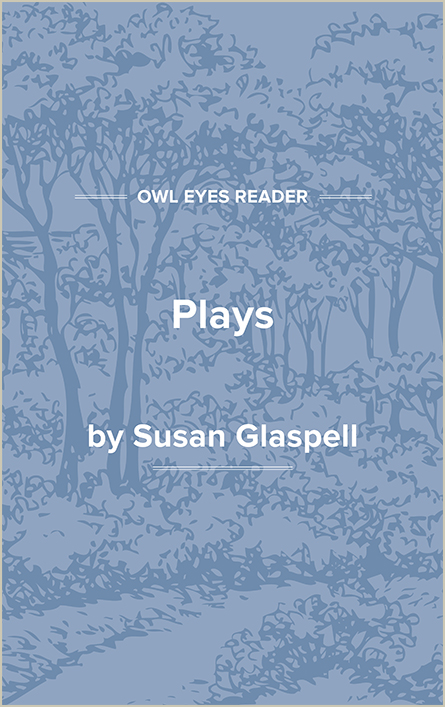 Susan Glaspell (GLAS-pehl), dramatist, novelist, and writer of short stories, was born in Davenport, Iowa, on July 1, 1876, the daughter of Elmer and Alice Keating Glaspell. Her forebears were among the earliest settlers of Davenport. She graduated from high school in 1894 and then worked for three years as a reporter for the Davenport Morning Republican and Davenport Weekly Outlook. While at the latter she wrote a “Social Life” column and published her first short story. In 1897 she entered Drake University in Des Moines, where she studied philosophy, excelled in debate, wrote short stories for the college’s The Delphic, and served as literary editor of the school newspaper.

After graduating from college in 1899 Glaspell worked for the Des Moines Daily News and wrote a column there called “The News Girl.” In 1901 she resigned this post to return to Davenport and concentrate on writing fiction. Between 1901 and the mid 1920’s she turned out a number of successful short stories. Many of these contain themes similar to what she had written about in her column. During these years Glaspell also worked briefly in Chicago on the Chicago Daily Review and did graduate work in English at the University of Chicago. In 1909 her first novel, The Glory of the Conquered: The Story of a Great Love, was published and became a best-seller. Other successful novels include Fidelity in 1915, Fugitive’s Return in 1929, Ambrose Holt and Family in 1931, and Judd Rankin’s Daughter in 1945.

In 1912 Lifted Masks appeared, a collection of thirteen of Glaspell’s stories that exemplify her local-color writing. In 1913 Glaspell, then thirty-six, married George Cram Cook, a classics scholar and twice-divorced iconoclast from Davenport. The couple settled in Provincetown, Massachusetts, during the summer months and spent their winters in New York City. Cook founded the Provincetown Players in 1915. At the Wharf Theater in Provincetown the group produced Glaspell’s first two plays, the one-act play Suppressed Desires and the one-act play Trifles. Other one-act plays that Glaspell wrote for the Provincetown Players include The People, Close the Book, The Outside, Woman’s Honor, and, together with Cook, Tickless Time. During these years the Provincetown Players was the best-known innovative small theater group in the country; Glaspell participated in many of their productions as an actress.

Glaspell wrote eleven of the one hundred plays produced by the Provincetown Players during its seven-year existence. In the summer of 1916 she invited Eugene O’Neill to join their group, and Cook convinced the Provincetown to open the Macdougal Street Playwright’s Theater in Greenwich Village in September of that year. Known as the Provincetown Playhouse, this was where the group’s plays were performed during winter months. In the 1910’s Glaspell was considered by many to be the Provincetown’s best playwright; subsequently, she and Eugene O’Neill were regarded as its two luminaries. Some of Glaspell’s best stories were also published at this time. These include “Government Goat,” “The Busy Duck,” “The Hearing Ear,” “‘Finality’ in Freeport,” “Pollen,” and “The Escape.”

When Cook decided that the Provincetown Players was becoming too commercial for him, he and Glaspell ended their connection with the theater and in March of 1922 sailed for Greece. Two years later Cook died there of a rare disease. Glaspell returned to the United States, where she soon after started her relationship with the novelist and playwright Norman Matson, who was seventeen years younger than she. In 1926 Glaspell published The Road to the Temple , a biography of Cook’s life. A year later...