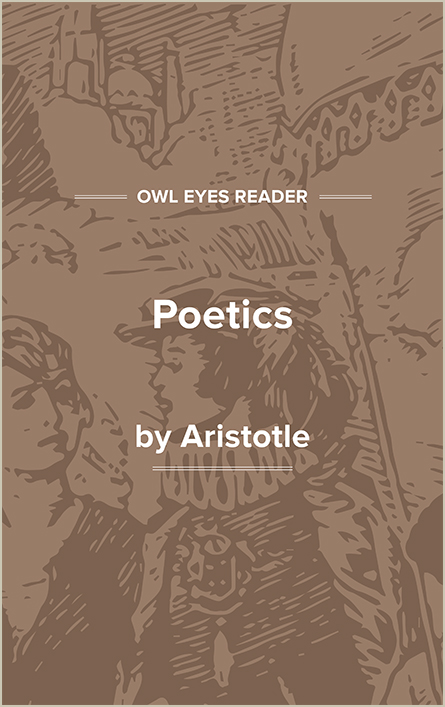 The significance of the Poetics cannot be overemphasized. In format, content, and methodology, Aristotle’s analysis of the literature of Greece is the origin of Western literary criticism. His examination of the components and aims of comedy, epic, and tragedy evolved into what is probably the first, and certainly the most influential, formalist analysis of literature in the Western tradition.

At the center of Aristotle’s analysis lies his explanation of the concept of mimesis, the process of representing reality in works of literature. Mimesis does not imply mimicry of the everyday world, however; Aristotle is careful to stress that the job of “the poet” (which later critics have expanded to mean the author of any form of imaginative literature) is to present portraits of humankind as a means of helping audiences learn something about themselves. Far from being lies, as Plato calls the works of poets, good poems and dramas are useful to society because readers and audiences can learn from the experiences of fictional characters without having to experience for themselves the traumas and heartbreaks they can see in tragedy or the foibles and humiliations they can experience through comedy.

Unfortunately, during the later Renaissance and neoclassical periods, the process of description employed by Aristotle in examining the drama and poetry of classical Greece became a prescription for producing and evaluating similar works. French and English dramatists of the seventeenth and eighteenth centuries endeavored to produce plays that adhered slavishly to the unities of time, place, and action they found set down by Aristotle. Although later generations abandoned the criteria set forth in the Poetics for determining the value of specific genres, Aristotle’s method of analysis became the basis for the method of literary analysis known as genre criticism. The idea of judging the worth of a particular poem, play, story, or novel by comparing it to designated criteria that characterize other, similar productions has become a staple of literary criticism.

Although his reputation as one of the greatest philosophers of all time rests principally on his work in metaphysics, Aristotle nowhere shows himself more the master of illuminating analysis and style than in the Poetics. The conception of tragedy that Aristotle developed in this work has perpetuated the Greek ideal of drama through the ages.

Aristotle begins his essay with an exposition of the Greek idea that all poetry, or art, is representative of life. For the Greeks, the idea of poetry as imitative or representational was a natural one because a great deal of Grecian art was representational in content. By “representation” was meant not a literal copying of physical objects, although it was sometimes that, but a new use of the material presented by sense.

Aristotle’s intention in the Poetics is to analyze the essence of poetry and to distinguish its various species. Among the arts that Aristotle mentions are epic poetry, tragedy, comedy, dithyrambic poetry, flute playing, and lyre playing. These arts, all of which a poet in Aristotle’s time may have been expected to practice, are regarded as representative of life, but they are distinguished from one another by their means and their objects. The means include rhythm, language, and tune, but not all the arts involve all three, nor are these means used in the same way. For example, flute playing involves the use of rhythm and tune, but dancing involves rhythm alone.

When living persons are represented, Aristotle writes, they are represented as being better than, worse than, or the same as the average. Tragedy presents people who are somewhat better than average, while comedy presents people who are somewhat worse. This point alone offers strong evidence against a narrow interpretation of Aristotle’s conception of art, for if people can be altered by the poet, made better or worse than in actual life, then poetry is not merely...