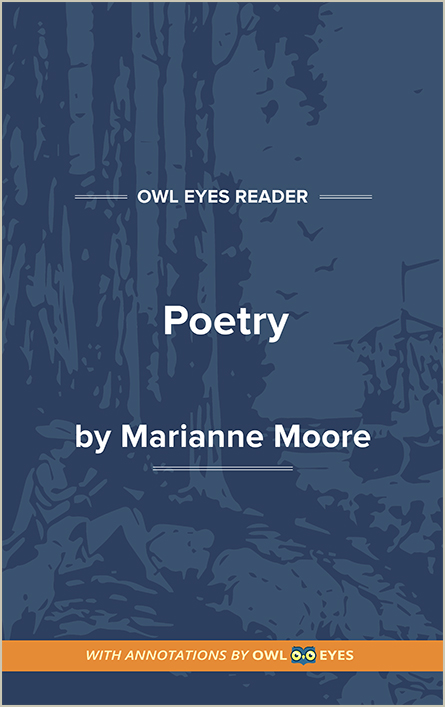 Clean, Concrete Images: Moore introduces a list of descriptive animal imagery, emphasizing that these “phenomena” can still evoke images and weight, even without the typically thought-of poetic language to describe them. With just the base, “raw” materials, Moore exhibits her argument that poetry should focus on producing the “genuine.”

The power of descriptive language: The poem claims that by using “raw” language, the poet possesses an ability to create genuine emotions or reactions from the reader. By focusing on language and form, the poet can conjure images so vivid they can nearly be felt or seen by the readers themselves. This sensory representation is what Moore argues is the real appeal of poetry, rather than any intellectual analysis of it.

Verse Form: In this version of “Poetry” there are five stanzas, each consisting of six lines which follow a syllable-count sequence of 19, 22, 11, 5, 8, and 13. Moore used syllabic verse structures in many of her poems.

The verb “dragged” applies to the “phenomena” listed in the previous stanza. The contrast between these two words is striking: “phenomena” means “ideas”; “dragged” implies moving heavy objects. Moore’s diction here conveys the speaker’s broadest claim that poetry ought to render its subjects “real” in the mind. The purpose of poetry is to make ideas into objects, to give them weight.

In an intriguing use of enjambment, Moore leaves the word “tireless” hanging at the end of the line right after the description of the wild horse’s “roll.” This associatively evokes the roll of a tire, even though “tireless” means something else entirely given the context provided in the next line.

"all these phenomena are important..."  See in text (Poetry)

Notice that the speaker lists many things that constitute the genuine subjects of poetry. However, she lists them without adding poetic descriptions to them. This type of list underscores her point: with a genuine subject and the raw material of poetry, she can create an image in the mind of her reader rather than creating a complicated metaphor onto which the reader can place overwrought interpretation. This list can be read as a metaphysical moment in which the speaker enacts the type of poetic expression for which she advocates.