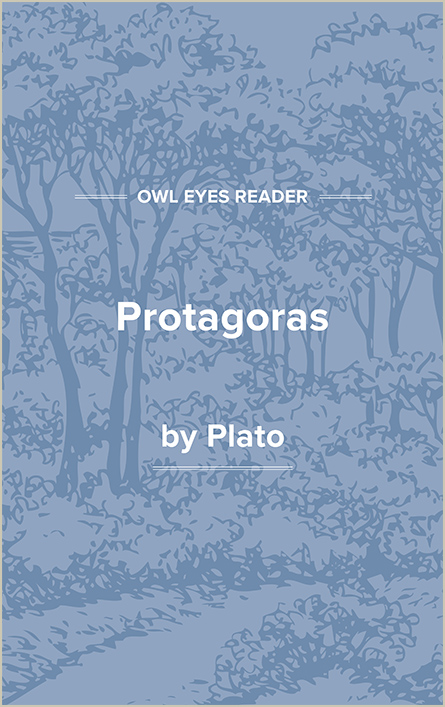 The Protagoras, like several of the Dialogues of Plato, is put into the mouth of Socrates, who describes a conversation which had taken place between himself and the great Sophist at the house of Callias—'the man who had spent more upon the Sophists than all the rest of the world'—and in which the learned Hippias and the grammarian Prodicus had also shared, as well as Alcibiades and Critias, both of whom said a few words—in the presence of a distinguished company consisting of disciples of Protagoras and of leading Athenians belonging to the Socratic circle. The dialogue commences with a request on the part of Hippocrates that Socrates would introduce him to the celebrated teacher. He has come before the dawn had risen—so fervid is his zeal. Socrates moderates his excitement and advises him to find out 'what Protagoras will make of him,' before he becomes his pupil.

They go together to the house of Callias; and Socrates, after explaining the purpose of their visit to Protagoras, asks the question, 'What he will make of Hippocrates.' Protagoras answers, 'That he will make him a better and a wiser man.' 'But in what will he be better?'—Socrates desires to have a more precise answer. Protagoras replies, 'That he will teach him prudence in affairs private and public; in short, the science or knowledge of human life.'