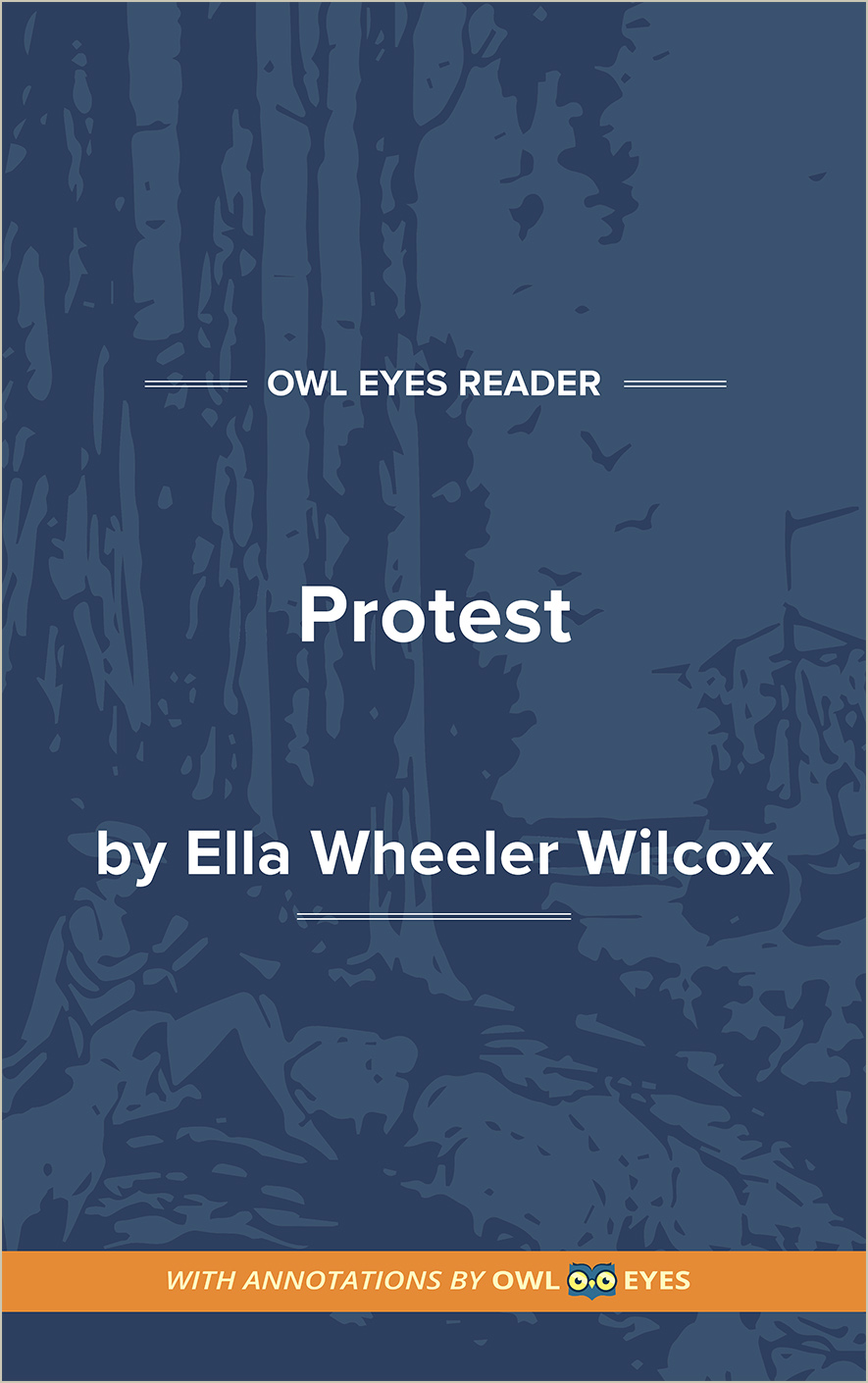 Recall that Wilcox’s use of the word “men” in the second line of the poem can be read in a few different ways. Since the term “man” has historically functioned as a general term for all of humankind (like “mankind”), we can read this line as a general claim that no human being can call this land “free” if the conditions above have not been met. However, if we read this line as a specific reference to the male gender, then the line may suggest that men cannot call this land “free” while that freedom is only available to a privileged few.

"Until the mother bears no burden, save The precious one beneath her heart..."  See in text (Text of the Poem)

“The precious one” here probably refers to a child, and the “burden” to childbearing. Wilcox suggests that childbearing should be the only hardship that women have to face because childbirth is the inherent, natural burden connected to their sex. This assertion in turn condemns the social hardships placed on women as these burdens are constructed by men rather than nature.

"purchase ease for idle millionaires..."  See in text (Text of the Poem)

Wilcox’s use of the verb “to purchase” here represents the capitalistic society in which she lives. That the work of laborers can buy comfort for millionaires who do not toil is a powerful condemnation of wealthy elites who are born into a privileged status. Since the marginalized people of society are forced to do the work that those of a higher socioeconomic status would find undesirable or grueling, the words “ease” and “idle” operate on both a physical and psychological level. Wealthy people can “purchase” their own emotional and physical health and safety, and the marginalized essentially become human capital.

By referring to the land as “God’s soil,” Wilcox emphasizes that land ownership either belongs to everyone or no one. The use of “rescued” also vividly illustrates how the greed of the wealthy have stolen this land for themselves and privatized it for their own gain.

The word “men” historically has been used to refer to humanity in general, and we can read it that way in this opening line since Wilcox’s claim applies to everyone. However, considering that Wilcox herself was an activist during the women’s suffrage movement, we can also interpret it as referring specifically to the male gender. Wilcox builds her argument on the knowledge that many men refuse to speak up about women’s rights issues because they see themselves as exempt from and unaccountable for the inequalities that oppress women. In this reading, Wilcox argues that women’s silence on issues of gender inequality could “make cowards out of men” because their own silence tolerates the silence from the male majority, or in other words—silence breeds silence.

Manacles are bonds, shackles, or restraints that go across the wrists or ankles and bind movement. By saying that babies are born with these, Wilcox creates a powerful, figurative image. These are not literal manacles; rather, they represent the privileged forces that restrict the social movement and progress of children born to marginalized groups.

"Call no chain strong, which holds one rusted link. ..."  See in text (Text of the Poem)

The English proverb “A chain is only as strong as its weakest link” has provided a valuable metaphor throughout history. In this instance, Wilcox builds on the idea that a whole cannot be strong when one part is unhealthy. Notice though, that Wilcox says “rusted” instead of “weak.” Rust carries connotations of “forgotten” or “neglected,” and since Wilcox is saying that the marginalized and oppressed need to be heard, the implication being that the concerns of less privileged groups have historically been forgotten and neglected.

"The lawlessness of wealth-protecting laws..."  See in text (Text of the Poem)

Wilcox makes a strong condemnation of the regulations that protect the wealthy. The use of the oxymoron, “lawlessness of laws,” emphasizes this point. Laws that protect only a wealthy elite only serve to oppress and do not serve a true, lawful purpose in protecting the rights of all.

The use of “may” in this section emphasizes that we have the legal right and permission to protest against oppression in any form. Reminding the people that they have a government-protected right to protest actually serves a valuable purpose because many other countries around the world did not, and still today do not, guarantee this right.

This selection begins with two components related to the importance of speech: “voice” refers to the people’s ability to speak out, and “press” refers to the media, known as the fourth estate, who provide valuable checks on governments and other organizations by disseminating information to the people. Since Wilcox says that “[p]ress and voice may cry loud disapproval,” she is illustrating the importance of their ability to vocalize and protest against injustice and oppression.

These two words, “gag” and “throttle,” both refer to the silencing of voices and speech. The verb “to gag” literally refers to placing a gag, like a piece of cloth, into someone’s mouth in order to prevent speech. It can also be used figuratively to refer to being silenced in general. The verb “to throttle” not only means to choke or restrict airflow from a subject, reducing the ability to speak, but also it refers to repressing or preventing someone from speaking or expressing an opinion.

The adjective “vested” in this context refers to power that completely and unconditionally has been guaranteed as a legal right, benefit, or privilege. For example, an elected leader has vested power because the position she has assumed has rights and powers that are supported by a governing organization. In this line, Wilcox uses the adjective for emphasis to stress that the freedom of speech cannot be taken away even by those who have such powers because this freedom is guaranteed in the US Constitution.

When she says “Speech,” Wilcox is referring to the first amendment in the US Bill of Rights that guarantees the protection of free speech. Wilcox rejoices in this fact since protesting is a powerful form of speech expression.

The repetition of “speak” in this line provides a rhetorical emphasis on the process of protesting, creating an urgent tone during this call to action. Daring to speak is important, but in order for real change to occur, protesting must be understood as a process that requires constant vigilance.

The inclusive pronoun “our” brings readers directly into Wilcox’s argument, which is a rhetorical strategy that keeps the message personal instead of creating distance by using “their.” Also, “least disputes” refers to those concerns and problems that do not require systemic changes. Therefore, the impact of this line is how the powerful could have used the guillotine to “decide”—which, given the finality of its purpose, means “end”—the outcome of all disputes, large or small.

Guillotines are no longer used for capital punishment for many reasons, but one that bears mentioning is its status as a barbaric practice. Different types of devices, like the guillotine, have been used to torture and separate body parts. Wilcox’s choice of “guillotine” then not only brings to mind the success of the French people overthrowing their aristocracy, but it also alludes to the historical mistreatment of people and the horrific punishments that abusive governments and religious organizations have enforced.

When Wilcox says that “the inquisition yet would serve the law,” she is saying that had people not gained knowledge, fought against injustice, and protested greed, then oppressive church doctrine would still have control over the enforcement of law. As seen during the Spanish Inquisition, when a religious organization has control over law enforcement, marginalized people suffer.

While “lust” can bring to mind sexual desire, the word more generally refers to a strong desire to possess something. Lust, like avarice or greed, is considered sinful or immoral behavior because it places more value on possessions than on people.

A lack of awareness, education, and knowledge is a general definition of ignorance. Wilcox’s inclusion of ignorance with these other three emphasizes a belief in the value of knowledge. One of the best ways to protest against ignorance is to spread knowledge, since unjust actions can be more readily unturned when enough people have the correct information.

The noun “injustice” generally refers to a wrong or unfair action that violates an agreed-upon notion of what is fair and just. However, as we’ve seen throughout history, the definition of what constitutes fairness and justice has often been debated.

"The human race Has climbed on protest...."  See in text (Text of the Poem)

Wilcox claims that the vehicle to equality and justice is protest. This image of the human race climbing adds to that claim on a couple levels. First, climbing is an upward movement, which is often used to represent social progress. Second, climbing is difficult movement, especially in contrast to walking or riding. Wilcox therefore reminds us that protesting is a struggle, but it is the most effective way to achieve social progress.

A “sin” is an act that goes against divine law, offending God or violating religious or moral principles. Wilcox herself was no friend to religious orthodoxy, and so the use of “sin” in this line should be read more generally: “It is a grave mistake to be silent.”