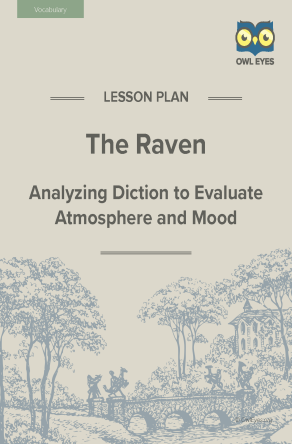 Analyzing Diction to Evaluate Atmosphere and Mood in "The Raven”

This lesson plan focuses on Poe’s diction and how it contributes to atmosphere and mood in "The Raven.” Students will examine the connotations of descriptive words in the poem and identify the atmosphere and mood they create in the text. By studying Poe’s diction, students will be better able to describe the setting of the poem, the mysterious raven, and the emotions they evoke in readers.

When “The Raven” was published in 1845, it launched Edgar Allan Poe to literary fame and critical acclaim he had not previously enjoyed.

Subsequent publications of the poem during Poe’s lifetime also received high praise. Between 1845 and 1849, several critics called it the best American poem ever written. A review by John Moncure Daniel, appearing in an 1849 Richmond Examiner article a month before Poe’s death, praised the poem’s “strange, beautiful and fantastic imagery” and its “musicality.” “The Raven,” Daniel said, is a “work of pure art.” With its iconic haunting mood, the raven’s mysterious presence, and the narrator’s overwhelming melancholy and emotional unraveling, “The Raven” remains Poe’s most popular poem and a celebrated work of gothic literature within the American literary canon.

“The Raven” is a quintessential story of grief. The narrator, trying to distract himself from the melancholy he feels for his deceased love, Lenore, studies late into a dark, dreary December night. At the sound of a tapping on his window, he opens it; a “stately” raven enters his chamber and, perching on a bust of Pallas Athena, regards him with an unwavering gaze. To quell his loneliness and despair, the narrator attempts to engage the bird in conversation, primarily about Lenore, but the raven responds to his questions by uttering only the word “nevermore.” On a deeper level, the poem examines the effects of profound grief on the human psyche. As his encounter with the raven continues, the narrator becomes frantic and increasingly unhinged, mentally and emotionally, until he is ultimately overwhelmed and paralyzed by his grief, with no hope of escaping it.

As Daniel noted in his review of “The Raven,” the poem is musical. Its musicality is created through Poe’s poetic discipline in adhering consistently to the same meter and end rhyme scheme that become almost hypnotic as one stanza follows another. The effect is heightened by other sound devices Poe employs, primarily alliteration, internal rhyme, repetition, and the poem’s unforgettable refrain, “Nevermore.” As Daniel also noted, the poem is one of rich images, both beautiful and strange. Through the musicality and the imagery in “The Raven,” Poe draws readers into the narrator’s tortured emotional state and the haunting atmosphere and mood of the poem.

A work of gothic literature, a popular genre which developed from romanticism in the 19th century, “The Raven” features numerous characteristics of a gothic tale: a gloomy setting, death, madness, mystery, strangeness, and the supernatural. The poem endures, however, as an examination of a universal human experience: the loss of one who was deeply loved.

Examining Atmosphere in “The Raven”

Focus on stanzas 1-5 in completing this handout. Discuss the questions as a group, with your group’s recorder writing down the answers on his or her handout. Monitor the answers as the recorder writes them down to make sure they accurately and thoroughly express the thinking of your group.