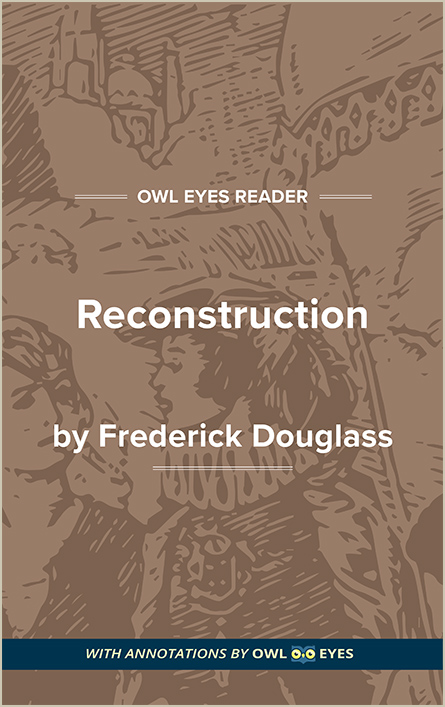 Frederick Douglass (1818–1895) was a leading abolitionist of the 19th century. Born a slave, he escaped to the North as a young man and became an important social reformer, known for his powerful writing and oratory. In 1866, he published “Reconstruction” in Atlantic Monthly magazine, a criticism of the federal government’s attempts to rebuild the South in the wake of the Civil War. The economic and social landscape of the postwar South was bleak. The Southern economy had been crippled by the expenses of the war and abolition of slavery. Racial tensions were high, since many white Southerners continued to recognize African Americans as property, despite the ratification of the Thirteenth Amendment in January of 1865. New president Andrew Johnson launched the process of Reconstruction with a series of decisions that many Northerners found baffling and infuriating. Without the input of Congress, Johnson pardoned numerous Confederate statesmen and appointed a new set of governors, many of them former Confederates. Furthermore, he allowed each state to hold a convention to draft up a new constitution; these conventions purposefully excluded African Americans. The new state constitutions, penned by white Southerners, included “Black Codes” that effectively forced African Americans back into slavery. Congress responded by overriding Johnson’s plans, ignoring the newly elected Southern congressmen, and passing a series of legislations to protect African Americans. In “Reconstruction,” Douglass offers his opinion on this state of events. He calls for the state governments of the South to be swept clean, replaced by the rulings of the federal government. He also calls for the full enfranchisement of African Americans, a wish he would see fulfilled by 1870 with the passing of the Fourteenth and Fifteenth Amendments.