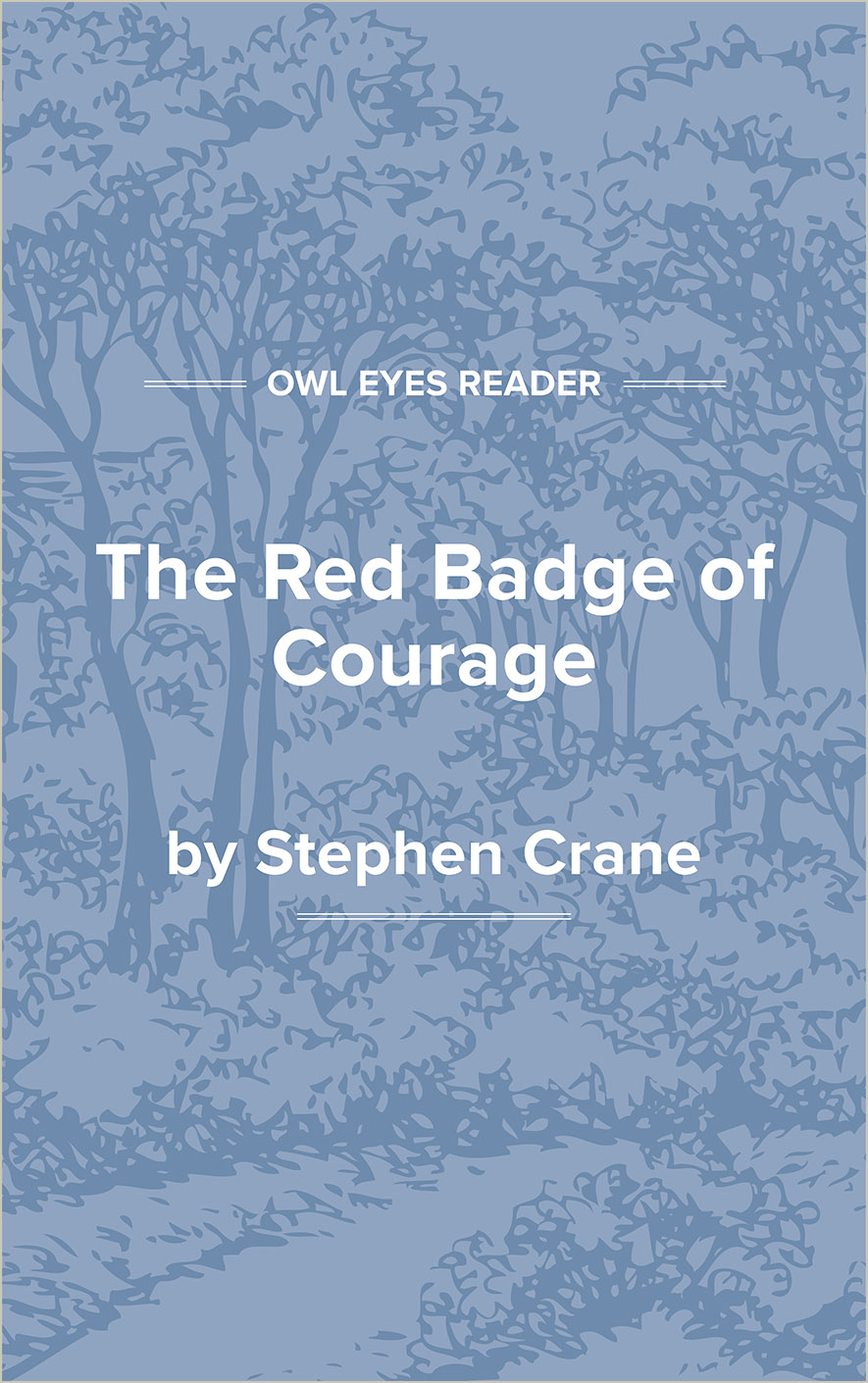 The tall soldier, Jim Conklin, and the loud soldier, Wilson, argue bitterly over the rumor that the troops are about to move. Henry Fleming is impatient to experience his first battle, and as he listens to the quarreling of the seasoned soldiers, he wonders if he will become frightened and run away under gunfire. He questions Wilson and Conklin, and each states that he will stand and fight no matter what happens.

Henry had come from a farm, where he had dreamed of battles and longed for Army life. His mother held him back at first. When she saw that her son was bored with the farm, she packed his woolen clothing and, with a warning that he must not associate with the wicked kind of men who were in the military camps, sent him off to join the Yankee troops.

One gray morning, Henry wakes up to find that his regiment is about to move. With a hazy feeling that death would be a relief from dull and meaningless marching, Henry is again disappointed. The troops make only another march. He begins to suspect that the generals are stupid fools, but the other men in his raw regiment scoff at his idea and tell him to shut up.

When the fighting suddenly begins, there is very little action in it for Henry. He lays on the ground with the other men and watches for signs of the enemy. Some of the men around him are wounded. He cannot see what is going on or what the battle is about. Then an attack comes. Immediately, Henry forgets all of his former confused thoughts, and he can only fire his rifle over and over; around him, men behave in their own strange individual manners as they are wounded. Henry feels a close comradeship with the men at his side—men who are firing at the enemy with him.

Suddenly the attack ends. To Henry, it seems strange that the sky above should still be blue after the guns had stopped firing. While the men are recovering from the attack, binding wounds, and gathering equipment, another surprise attack is launched from the enemy line. Unprepared and tired from the first round of fighting, the men retreat in panic. Henry, sharing their sudden terror, runs too.

When the fearful retreat ends, the fleeing men learn that the enemy had lost the battle. Now Henry feels a surge of guilt. Dreading to rejoin his companions, he flees into the forest. There he sees a squirrel run away from him in fright. The fleeing animal seems to vindicate in Henry’s mind his own cowardly flight; he had acted according to nature, whose creatures run from danger. Then, seeing a dead man lying in a clearing, Henry hurries back into the retreating column of wounded men. Most are staggering along in helpless bewilderment, and some are being carried on stretchers. Henry realizes that he has no wound and that he does not belong in that group of staggering men. There is one pitiful-looking man, covered with dirt and blood, wandering about dazed and alone. Everyone is staring at him and avoiding him. When Henry approaches him, the young man sees that the soldier is Conklin. He is horrified at the sight of the tall soldier. He tries to help Conklin, but with a wild motion of despair, Conklin falls to the ground dead. Once more Henry flees.

Henry’s conscience is paining him. He wants to return to his regiment to finish the fight, but he thinks that his fellow soldiers will point to him as a deserter. He envies the dead men who are lying all about him. They are already heroes; he is a coward. Ahead he can hear the rumbling of artillery. As he nears the lines of his regiment, a retreating line of men breaks from the trees ahead of him. The men run fiercely, ignoring him or waving frantically at him as they shout something he cannot comprehend. He stands among the flying men, not knowing what to do. One man hits him on the head with the butt of a rifle.

Henry goes on carefully, the wound in his head paining him a great deal. He walks for a long while until he meets another soldier, who leads Henry back to his regiment. The first familiar man Henry meets is...