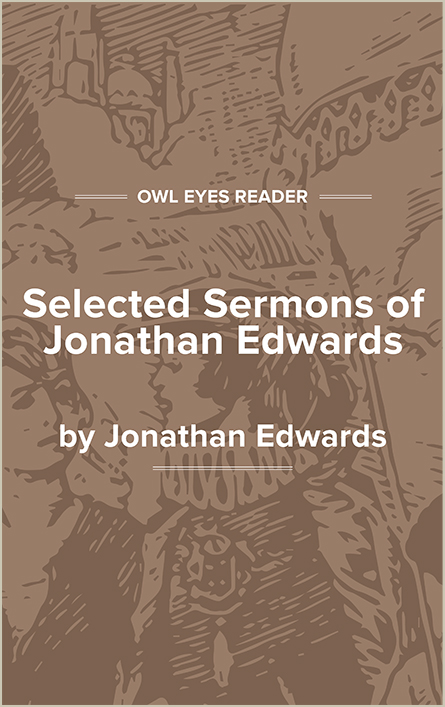 Article abstract: The greatest Puritan theologian in America, Edwards tried to establish an intellectual foundation for Puritanism, to find a rational interpretation of predestination, and to justify the ways of God to humanity.

Jonathan Edwards was born in East Windsor, Connecticut, on October 5, 1703. East Windsor was still frontier, where worshipers carried muskets to church. Edwards was the only boy in his family, with ten sisters, but there were seven male cousins living next door and a number of boys attending school under Edwards’s father, the Reverend Timothy Edwards. Educated by his father, Edwards was a precocious child who was ready for college at the age of thirteen. When he was eleven, he wrote a paper on flying spiders that is remarkable for both its scientific observation and its literary skill. As a teenager, Edwards was already dedicated to religion as his unquestioned calling. Sober and meditative by temperament, he had a private place of prayer deep in the woods.

In 1716, he entered Yale College, founded only fifteen years earlier, with a freshman class of ten. At this time, Edwards experienced an intense religious struggle, which he later described in his “Personal Narrative”; in particular, he had been “full of objections against the doctrine of God’s sovereignty, in choosing whom he would to eternal life, and rejecting whom he pleased; leaving them eternally to perish, and be everlastingly tormented in hell.” This doctrine appeared horrible to him, but somehow he managed to accept it and to delight in God’s absolute sovereignty. After graduating from Yale at seventeen, in 1720, Edwards studied theology for two years in New Haven, after which he served for a year and a half as pastor to a Presbyterian church in New York City. For the next two years, Edwards was a tutor at Yale. On February 22, 1726, he was ordained at Northampton, Massachusetts, as assistant minister to his eighty-four-year-old grandfather, Solomon Stoddard. About twenty-five miles north of East Windsor, on the Connecticut River, Northampton was then an isolated frontier village, cut off by forests from the wider world. In July of 1727, Edwards married Sarah Pierrepont, the daughter of a founder of Yale. Edwards was then twenty-three, his bride seventeen. She was apparently the ideal wife for him: a capable manager, a devoted mother to their surviving three sons and seven daughters, and a deeply religious person able to share her husband’s spiritual life. When the famous evangelist George Whitefield visited the Edwards family in 1740, he was so impressed with Mrs. Edwards that he wished he could marry someone like her. When Solomon Stoddard died in 1729, Edwards, at twenty-six, became the minister of the chief parish of western Massachusetts.

Coming of age when the Puritan oligarchy had crumbled and when Puritan theology was being challenged by Deism and by more liberal Christian denominations, Edwards tried to create a philosophical justification for Calvinist dogma. calvinism can be summed up in the acronym TULIP: total depravity, unconditional election, limited atonement, irresistible grace, and perseverance of the saints. First proclaimed in John Calvin’s Institutes of the Christian Religion (1536), these doctrines had been the backbone of Puritanism. The thorniest of them were the ideas that humanity is not merely in a state of Original Sin (which is not total and is balanced by human goodness) but is totally depraved; everyone deserves damnation, and most will receive it; and only a limited few will be saved by God’s inscrutable mercy. Along with this doctrine is the idea of predestination: There is no free will, and every detail of each individual’s life is predetermined by God, including salvation and damnation, which are ordained before birth, so that no amount of good works can merit salvation for one who is not among the elect.

Calvin offered no proof of these grim doctrines; he merely...