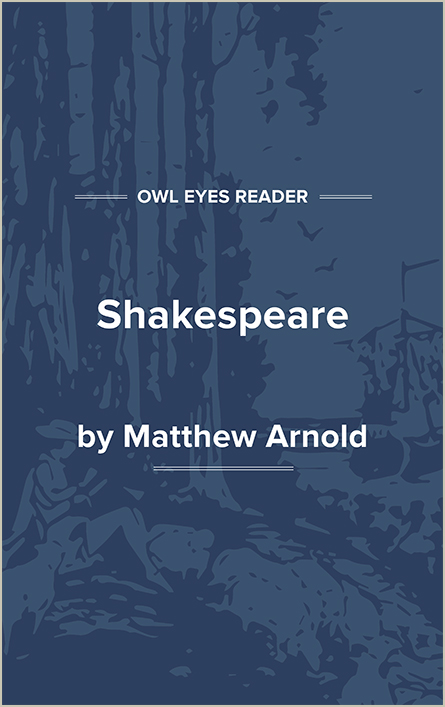 Matthew Arnold—poet, educator, and literary and social critic—was born at Laleham-on-Thames in Surrey on December 24, 1822, the second child and eldest son of Mary Penrose Arnold and the Reverend Thomas Arnold, the famous headmaster. His godfather was John Keble, a future leader of the Oxford Movement. In 1828 Matthew’s father became the headmaster of Rugby School. At Rugby Dr. Arnold brought about important changes in English education, not by spectacular reforms but rather through the force of his character and example, both of which affected his son profoundly. Instilling in his students religious and moral principles, gentlemanly conduct, and intellectual competence, Dr. Arnold transformed Rugby into a place of Christian education and into a celebrated public school. In a sense, Matthew became his father’s successor.

After spending a year at Winchester, his father’s old school, Matthew Arnold went on to Rugby (1837-1840) and was a student there during his father’s headmastership. At Rugby he won the poetry prize for his poem Alaric at Rome and won an open scholarship to Balliol College, Oxford. There he attended from 1841 to 1844. At the same time, his father started teaching at Oxford; in 1841 his father was appointed Regius Professor of Modern History. While at Oxford, Arnold studied classical literature, tied for second place for the Hertford Latin Scholarship, and won the Newdigate Prize for his poem Cromwell, an undertaking which convinced him that poetry would be his vocation. He was a member of the Decade, Oxford’s undergraduate debating society, and was a close friend of Arthur Hugh Clough, whose death (in Florence in 1861) he mourned in the pastoral elegy “Thyrsis” (1866).

Nevertheless, Arnold was an idle and aloof student at Oxford. Typical of his unspectacular undergraduate career was his limited interest in the Oxford Movement, the religious revival then occurring at Balliol. In 1842 Arnold’s father died suddenly of heart trouble at the age of forty-seven. Arnold graduated from Oxford with second-class honors two years later. Afterward he taught classics briefly at Rugby and was then elected to a fellowship at Oriel College, Oxford, in March of 1845.

Pursuing what became a lifelong enthusiasm for travel, Arnold toured France and Switzerland in 1846. The following year he became private secretary to Henry Petty-Fitzmaurice, Lord Lansdowne. Arnold’s first volume of poems, The Strayed Reveller, and Other Poems, was published in 1849. “Memorial Verses” appeared in Fraser’s Magazine in 1850. In April of 1851 Lord Lansdowne appointed Arnold inspector of schools, a position he held until nearly the end of his life and one that provided him an income sufficient to relieve him of financial worries. Arnold was sent to the Continent several times to investigate public secondary education in France and Germany. In June of 1851 Arnold married Frances Lucy Wightman, daughter of Sir William Wightman, judge of the Court of the Queen’s Bench. On their honeymoon to the Continent, the couple visited the monastery of the Grande Chartreuse in the French Alps, the subject of Arnold’s “Stanzas from the Grande Chartreuse” (1855).

During the 1850’s Arnold published more poetry. Empedocles on Etna, and Other Poems was published in 1852. Poems appeared a year later. In 1855 Poems, Second Series was printed. In 1857 Arnold was elected professor of poetry at Oxford at the age of thirty-four. He retained this position for ten years. His inaugural lecture was titled “On the Modern Element in Literature.” Within a decade Arnold was the leading critic of his age. In 1858 he settled in London at 2 Chester Square.

Arnold’s poetry was all written during his early years. He wrote very little verse after 1867. In his own time his poetry never attained the popularity of that of his contemporaries Alfred, Lord Tennyson and Robert Browning and Elizabeth Barrett Browning, and with a few exceptions it is not especially well...