Are you a teacher? Subscribe today to access hundreds of premium teaching resources and lesson plans! close
close
close
close
« Library « Poetry « The Song of the Smoke « W. E. B. Du Bois Biography 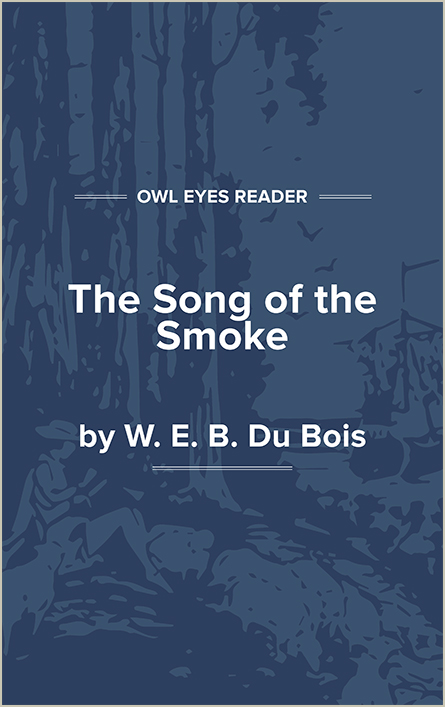 William Edward Burghardt Du Bois (dyew-BOYS) was a thinker, writer, editor, teacher, and activist. Among his many distinctions, he was the first African American to earn a Ph.D. from Harvard University. He helped found the National Association for the Advancement of Colored People (NAACP), and his ninety-five years saw the United States change from a land of small towns and farms to a nation of cities and industry. He was called many things—visionary, propagandist, scholar, communist, prophet, atheist. Each label held some truth.

Three years after the Civil War ended, W. E. B. Du Bois was born in Great Barrington, Massachusetts, a town of approximately four thousand people with a scattering of African American families. His bloodline contained French and Dutch strains but was primarily African, descended from Tom Burghardt, a black freedman. Du Bois’s father left after two years, and his mother raised him. They were poor.

Du Bois worked hard and made excellent grades in school. His life was much like that of his white contemporaries until his teens, when he became aware of being different. A girl’s scornful rebuff and his arrest for stealing a few grapes were two experiences that initially shaped Du Bois’s emerging concept of the African American “double consciousness,” a conflict between being both black and American.

While in high school, Du Bois’s letters and political commentaries began appearing regularly in the New York Globe, a widely distributed newspaper. Already, Du Bois was committed to going to college, which few people did in those years. He wanted to attend Harvard, but money was scarce. At seventeen he entered Fisk University, a black school in Tennessee. Du Bois excelled in academics at Fisk, but he also discovered at first hand the painful legacy of slavery. The experience provided inspiration and content for his most famous book, The Souls of Black Folk, which was published in 1903 as a mixture of philosophy, autobiography, and social study. Du Bois began to believe that the best educated African Americans, the “talented tenth,” should become active leaders for other black people. Some critics of Du Bois later used this concept to brand him an elitist.

Du Bois then entered Harvard’s master’s degree program, followed by a trip to Germany for Ph.D. study. He found little racism in Europe and even considered marrying a German girl who proposed to him. He began experimenting seriously with fiction, touching on themes and characters that he would later employ in novels. To Du Bois’s regret, his funds ran out, and he returned to Harvard to take his Ph.D. in 1895. In 1896 he married Nina Gomer.

Even before receiving his doctorate, Du Bois began teaching at Wilberforce University. He followed this with a temporary appointment at the University of Pennsylvania, where he completed the first scientific study of African Americans in urban environments. This was published in 1899 as The Philadelphia Negro.

The next twelve years found Du Bois at Atlanta University, where he produced a nationally recognized body of scholarship on African Americans in the South. Atlanta was hard on Du Bois, however. His son died, and he expressed his grief in an essay, “Of the Passing of the First-Born.” In addition, conflict arose between Du Bois and Booker T. Washington (chief African American spokesman at the time) over the best way for black people to advance.

In 1909 Du Bois helped found the NAACP and became editor of its magazine, The Crisis. He moved from scholarship toward social and political commentary. His first novel, The Quest of the Silver Fleece, was published; it was noted for its socialist themes. At The Crisis