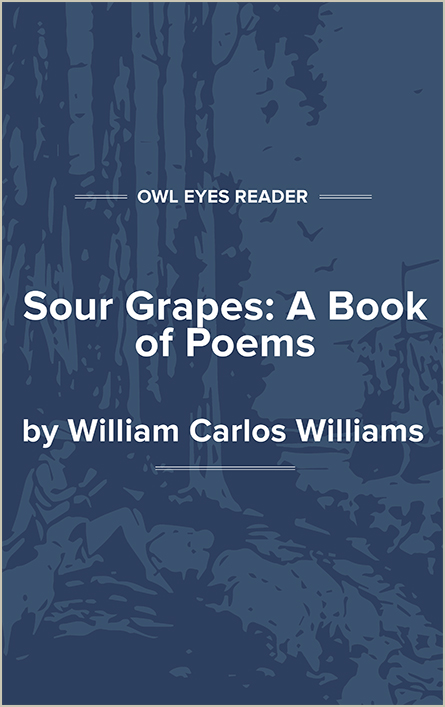 William Carlos Williams was a major American modernist poet to whom recognition came late in his career, and who influenced many subsequent poets in their search for a contemporary voice and form. Williams was born in Rutherford, New Jersey, on September 17, 1883, to a mother born in Puerto Rico and an English father. Both parents figure in a number of Williams’s poems. In 1902 Williams began the study of medicine at the University of Pennsylvania and while a student formed important friendships with Ezra Pound and the painter Charles Demuth. In 1910 Williams began his forty-year medical practice in Rutherford, marrying Florence Herman in 1912.

Williams’s first book of poems, entitled Poems and privately printed by a local stationer, was replete with the kind of archaic poetic diction and romantic longing typical of much American magazine poetry at the time. (In later years, Williams refused to allow the book to be reprinted.) As a result of Pound’s directive that he become more aware of avant-garde work in music, painting, prose, and poetry, Williams’s next book, The Tempers, reflected Pound’s pre-Imagist manner—a variety of verse forms, short monologues, and medieval and Latinate allusions. Williams responded with enthusiasm to the Imagist manifestos of 1912 and 1913, and much of his subsequent poetry reflects the Imagist emphasis upon concrete presentation, concision, and avoidance of conventional rhythms. Williams developed these principles in his own way, arguing that the new conditions of America itself and the primitive state of its literature demanded eschewing European literary conventions and traditions, and developing an American poetics of international standard, yet expressive of the American language and landscape. Al Que Quiere! reflects Williams’s working out of these and associated strategies, his developing an aesthetic that insists upon the ultimately creative reward of despair and destruction, and the importance of passionately engaging the object world of the native landscape with a kind of preconscious energy that breaks the conventions of perceptual habit. The 1920’s volumes Sour Grapes, Spring and All, and The Descent of Winter (the latter two works can be found in the collection Imaginations) bring these concerns to fruition.

After 1913, Williams formed friendships with a number of important writers and painters working in and around New York, including Marsden Hartley, Wallace Stevens, and Charles Sheeler. He saw his hopes for native expression confirmed by the arrival in New York of such major modernist figures as Marcel Duchamp and Francis Picabia at the time of World War I. He was doubly disappointed in the early 1920’s by the exodus of these figures and many American artists to Paris and by the success of T. S. Eliot’s The Waste Land (1922). Both events signified to Williams the triumph of the international school of modernism against which he had spiritedly set himself in the 1918 “Prologue” to his Kora in Hell.

Williams labored on his writing for the next twenty years, largely unrecognized except by readers of the short-lived small magazines that printed experimental American work. What some critics consider Williams’s finest book, the prose and poetry sequence Spring and All, was printed in Paris in an edition of only three hundred and not reprinted in full until 1970, seven years after his death. The sequential format suggesting multiple but loosely linked relationships among the twenty-seven poems and interspersed prose illustrates Williams’s inventiveness on the levels of individual poems and overall formal structure. This book contains the famous “The Red Wheelbarrow,” later printed by Williams as a separate poem, and often anthologized as the quintessential Imagist expression.

In the 1930’s, Williams’s work took a more overtly political turn, although he had always shared the view of Pound and Eliot that the work of the poet was central to the health and potential of a...