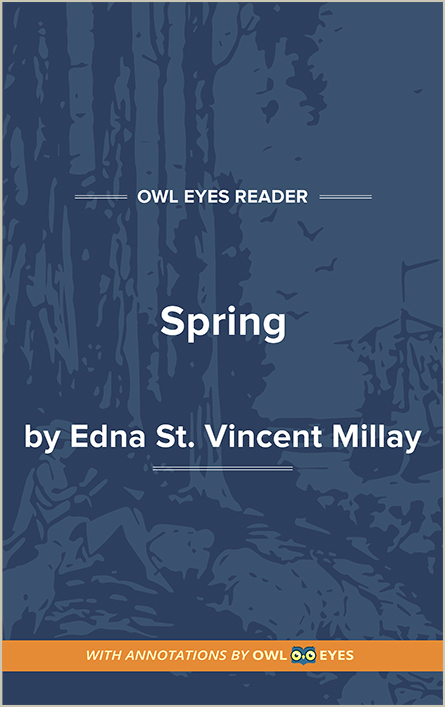 Millay shortens these lines to create a meager feeling. This feeling matches the lack of meaning the narrator finds in her April surroundings. The shortness of the lines also causes the reader to take frequent pauses and experience the void —the “nothing[ness]”—at the end of each line.

The narrator underscores her idea about the limits of beauty with a poignant stylistic move. By breaking from the classic pentameter of the first line in favor of a jolting line of trimeter—three beats per line, with a fluctuating rhythm between unstressed and stressed syllables— , the narrator steps away from traditionally beautiful poetic forms.

Notice that the narrator stops describing her experience of summer in order to determine what this physical experience means. This demonstrates the narrator’s attempt to intellectualize spring.

While Millay wrote the vast majority of her work in traditional verse forms, “Spring” is an example of “free verse.” The poem follows no strict meters or rhyme schemes. The purpose of this is approach is to subvert classical depictions of springtime, which in traditional poetry is written about in pleasing ballad forms. By removing the poetry from the poem, Millay’s narrator signals her thesis: that April is without meaning.

While the poem opens with a question it will actually go on to explore this statement rather than the posed question. The narrator asserts that “I know what I know” to place the poem firmly in her own perceptions and opinions.