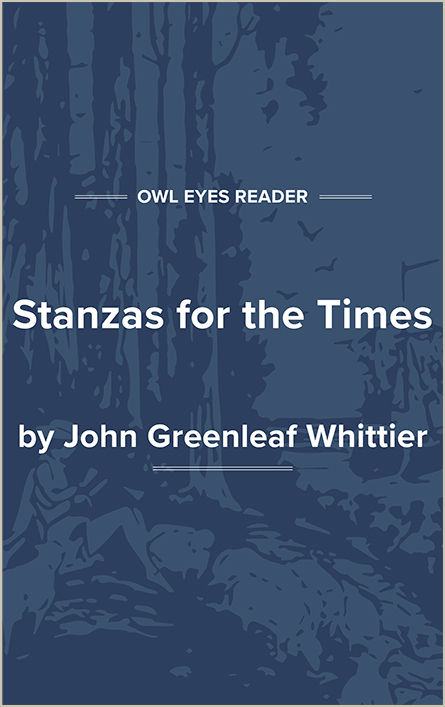 John Greenleaf Whittier was born in Haverhill, Massachusetts, on December 17, 1807, in an old family homestead built by a Quaker ancestor. He was the second of four children in the family of John Whittier and Abigail Whittier, of old Quaker stock. Besides John Greenleaf, the Whittier children included an older sister Mary, a younger brother Matthew Franklin, and a younger sister Elizabeth Hussey. Several other relatives lived with the family, including a paternal grandmother, a bachelor uncle, and a maiden aunt. The poet’s father was an honest, industrious farmer who tilled his hard, rocky land in the Merrimack Valley with only marginal success. Whittier’s mother was a model of quiet strength and deep refinement. She was noted in the community for her domestic industry and “exquisite Quaker neatness.” The entire family attended Friends’ services at Amesbury, nine miles away, even in poor weather.

Whittier’s childhood was one of hard farmwork (that eventually weakened his health) and the occasional freedom of the outdoors—a life of frugality, harmony, and affection later idealized in “Snow-Bound” and “The Barefoot Boy.” There were few books in the Whittier household besides the Bible and John Bunyan’s The Pilgrim’s Progress (1678, 1684), and the family depended for entertainment on the tales of his uncle Moses and the stories brought by itinerant Yankee peddlers and gypsies. Whittier’s education was meager, consisting of sporadic attendance at the district school and several terms at Haverhill Academy. One of the local teachers, Joshua Coffin, introduced him to the poetry of Burns, and made such a lasting impression on young Whittier that he was later commemorated in “To My Old School Master.” As a boy, Whittier showed a natural gift for rhymes and verse, and wrote simple ballads in imitation of Burns and Sir Walter Scott. His sister Mary sent one of these to the local newspaper, the Newburyport Free Press. The editor there, William Lloyd Garrison, was so impressed that he paid a personal visit to the Whittiers to urge further education for their son. Whittier’s father was said to have replied to Garrison, “Sir, poetry will not get him bread.”

His father finally relented, and Whittier was allowed to enter Haverhill Academy at the age of nineteen. To pay his expenses, he learned the craft of shoemaking, a common winter vocation among New England country folk. Meanwhile, his poems continued to appear in the Haverhill Gazette and other publications. At Garrison’s behest, Whittier entered the world of Boston journalism and at twenty-two became editor of the American Manufacturer, a Whig trade weekly. In the summer of 1829, he was called home by the illness and death of his father, which required him to manage the farm and provide for his family. Still unhappy with the drudgery of farm life, Whittier gladly accepted an invitation from Hartford, Connecticut, in July, 1830, to edit the Weekly Review. Unfortunately, his health failed, and Whittier was forced to resign from this attractive position within eighteen months and return to Haverhill in 1832. He was now twenty-five years old, ambitious, but without purpose or direction. A letter from Garrison in the spring of 1833 restored Whittier’s spirits when he was invited to apply his talents to the abolitionist movement. From 1833 to the end of the Civil War, the abolition of slavery became the abiding goal of Whittier’s life.

Immersion in abolitionist politics made him a master of satire and invective but at the expense of his literary gifts. Out of his new commitment came Justice and Expediency , and that same year he was elected to the National Anti-Slavery Convention in Philadelphia. Thus began a thirty-year career of antislavery advocacy and agitation. Several times he was exposed to the threat of mob violence and barely escaped personal injury. He later said that he was prouder of his abolitionist work than of all his authorship, but this comment...