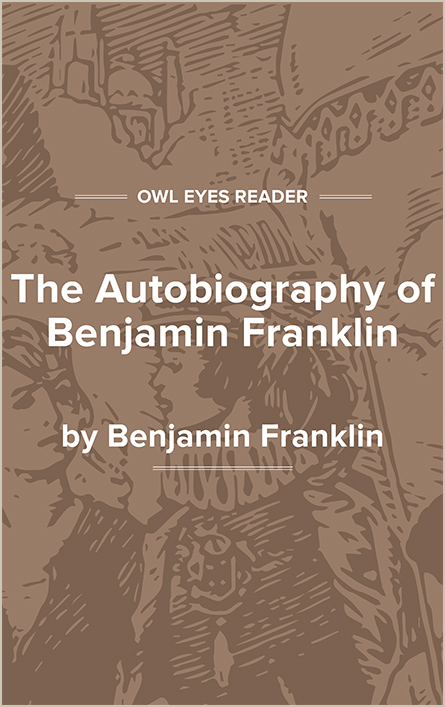 Benjamin Franklin was the son of Abiah Folger and Josiah Franklin, a poor soap boiler and tallow chandler. His formal education between 1714 and 1716 consisted of tutoring and a year’s study at the Boston Grammar School. He eventually acquired prodigious learning from his own experience and study, which included vast readings in American, British, and West European books and newspapers.

After working almost two years for his father, Benjamin was apprenticed to his half brother, James Franklin, editor of the New England Courant, from 1721 to 1723. James encouraged his brother’s first known literary efforts, the “Silence Dogood Essays,” satirical imitations of Cotton Mather’s Bonifacius: An Essay upon the Good (1706). Theocratic officialdom was outraged by these and other articles, and they warned the editor to desist in them. Shortly before the New England Courant was suppressed, Franklin broke the terms of his indenture in 1723 to emigrate to Philadelphia with little besides the clothes on his back. He worked for a year in a printing house there. Encouraged by Pennsylvania’s eccentric Governor Keith to begin his own printing business, Franklin sailed to England, but he soon discovered that Keith’s letters of credit were worthless. After saving enough from London printing jobs to return to Philadelphia in 1726, he clerked for a merchant before establishing himself as a printer.

In 1727 Franklin founded the Junto discussion group, the first American adult education class. In 1730 he became the owner of the Pennsylvania Gazette. In 1731 he started the Library Company of Philadelphia, the first American circulating library. He promoted Philadelphia’s advanced street paving, cleaning, and lighting. In 1749 he helped found the Academy of Philadelphia, which opened in 1751 and is now the University of Pennsylvania. He soon gravitated into colonial politics and patronage, serving as postmaster of Philadelphia (1737), state printer, clerk (1736-1750) and member (1751-1754) of the Pennsylvania Assembly, member of several Indian commissions, delegate to the intercolonial Albany Congress (1754), deputy and joint postmaster-general (1753-1774) for British North America, and Pennsylvania’s agent in London (1757-1762, 1764-1775).

During these years, the most sustained of Franklin’s literary productions was Poor Richard’s Almanack, whose proverbs illustrate his understanding that Puritan virtues had immense utilitarian value. A Deist and natural rights philosopher believing in the perfectibility of man, Franklin felt obligated to show others how they, too, could rise from rags to riches by consciously leading a frugal, industrious life. He considered experiential tests superior to a system’s logical consistency in evaluating the worth of concepts, but he carefully distinguished between the end and means. Franklin’s Poor Richard’s Almanack sold about ten thousand copies per issue and enabled him to retire in 1748 from active conduct of his printing and newspaper business, from which he thereafter derived an income of one thousand pounds yearly.

To devote himself to moral and natural philosophy and to further their study by others, Franklin helped establish the American Philosophical Society at Philadelphia in 1743. The popular conception of him as merely the inventor of practical devices, like his stove and lightning rod, does great injustice to Franklin the abstract scientist. He discovered the first law of electricity (conservation of charge), gave to electrical charges their positive and negative designations, and deduced that electrical properties of bodies depend on their shape, a fact which controls condenser design. His compendious Papers, Experiments, and Observations on Electricity won for him at home and abroad memberships in the major cultural and scientific societies and many honorary degrees. In a different field, Franklin’s discovery that Atlantic “nor’easter” storms move against the wind was a fundamental...