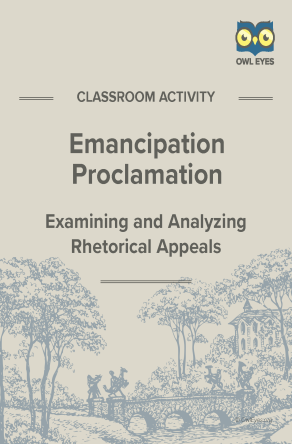 The Emancipation Proclamation, first published in September, 1862, and finally enacted on January 1st, 1863, was a landmark document that freed all American slaves in the Confederacy in the midst of the Civil War. Lincoln had several reasons for doing so: to unite the country under a single anti-slavery policy, to advance the cause of civil rights, and to cripple the slave-based Southern economy. Much of the rhetorical power of the proclamation, however, comes from the fact that Lincoln largely avoids explaining and justifying his decision to free the slaves. Instead, he simply declares them free and devotes his rhetorical attention—appealing to ethos, pathos, and logos—to proving that he possesses the power to do so.

The Owl Eyes Rhetorical Appeals activity gives students an opportunity to practice examining and analyzing the Aristotelian rhetorical appeals: ethos, pathos, and logos. Students will analyze selected rhetorical appeals from the text to determine which appeal they best represent and explain the appeal’s impact. The main components include the following:

In completing this worksheet, students will be able to examine and analyze Aristotle’s three rhetorical appeals in order to evaluate works of rhetoric and the techniques they employ.